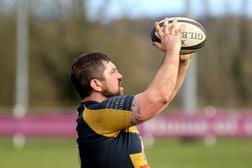 Leading 17 – 10 with 5 minutes of normal time remaining, Durham City could just as easily have won this North 1 East League match as lost it, but a late Bradford surge which produced a penalty try and penalty goal took it away from them in injury time.

Leading 17 – 10 with 5 minutes of normal time remaining, Durham City could just as easily have won this North 1 East League match as lost it, but a late Bradford surge which produced a penalty try and penalty goal took it away from them in injury time.

The home side began well forcing City to defend before getting their reward after 14 minutes when they attacked from their own half, winger Cameron Bainbridge cutting inside and good support work ending with lock Corey Spencer scoring and full-back Lance Taylor converting for a 7 – 0 lead. But City, with several personnel changes from the previous week, started to get into it, a good run by No.8 Peter Dent taking play to within 5 metres of the home line and several minutes of pressure eventually yielding a penalty which stand-off James Coxon converted.

The more fluent rugby was coming from the home side, but City began to make the most of their opportunities, none more so than in the 25 th minute when the ball went loose on halfway as Bees attacked and Dent picked up to race 50 metres for a try which Coxon converted for a 10 - 7 lead. Nine minutes later, winning the ball at the back of a Bees lineout, some fine handling ended with scrum-half Simon Ord blasting through the cover for an excellent try converted by winger Sam Heron and suddenly their advantage was extended to 17 – 7.

A penalty on the stroke of half-time by Taylor got Bees back to within one score however, and whilst City had a long period of pressure early in the second -half camped on the home line and were held up several times, the Bees defence just about held firm. Thereafter, defences dominated as attacks by both sides were thwarted until the 75th minute when Bees took a penalty quickly in City’s 22 and a huge drive was stopped by a tackle which was adjudged to be high resulting in the award of a penalty try and red card for the offending City player.

With the score now level at 17 – 17, it was either side’s game and Bees grabbed it with a second Taylor penalty in injury time before City almost came back, piling 10 men into a drive from a 5 metre scrum at the death only to be held up over the Bees’ line again.

On Saturday, City are at home to Cleckheaton (KO 2.15pm).