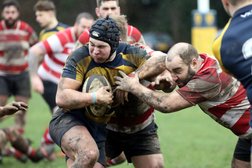 Under severe pressure for virtually the whole of the first half, they produced a defensive display that at times defied belief to restrict the visitors to a 7 – 0 lead, then draw level on their first visit to Cleckheaton’s 22 just before the interval before pulling away in the second half to establish a winning margin that, despite their best efforts, the visitors simply could not close.

Penning City in their own 22 in the first half, it seemed only a question of time before Cleckheaton capitalized on their pressure and they finally succeeded after 22 minutes when they ran following a big drive and centre Oliver Depledge created an overlap for winger Jack Marshall to score a well-worked try which stand-off Dale Breakwell converted.

Rather than break City’s resolve though, it only served to stiffen their defensive effort as the visitors continued to pile into them before a break by City centre Garry Izomor just before the interval finally took play into the Cleckheaton 22 for the first time and, after pressure on their line, a penalty try was awarded to City when a high tackle prevented a certain score.

Although the visitors were still on top generally in the second half, City came into it much more and proved more adept at grasping opportunities. A tap-down at a lineout a few metres from the visitors’ line allowed No.8 Dominic Warby to go clean through for City’s second try and an unlikely 12 – 7 lead quarter of an hour into the half and, 5 minutes later, a fine darting break by scrum-half Paul Armstrong from a scrum 12 metres out produced their third which he converted himself to stretch their advantage to 19 – 7.

But back came Cleckheaton, pick and goes in midfield paving the way eventually for the ball to be moved wide for winger Michael Haywood to score a good try in the left corner before Armstrong added a simple penalty for City.

At 22 – 12, City were starting to look safe though, but still the visitors came at them, centre Matt Piper powering over for their third try from a 5 metre penalty which Breakwell converted to reduce the leeway to 3 points and forcing City to hold out at the end.