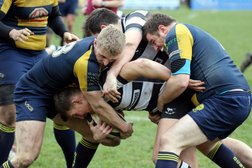 For two sides facing the possibility of relegation from the North 1 East League, this was a strange match in which poor defending prevailed and 14 tries were shared as a result.

For two sides facing the possibility of relegation from the North 1 East League, this was a strange match in which poor defending prevailed and 14 tries were shared as a result.

The honours deservedly went Percy Park who led from start to finish to push City back into the relegation zone, but with only 7 points separating 7 clubs with 5 matches remaining, it’s still anyone’s guess as to which of them will join West Hartlepool and Huddersfield YMCA who look certain to fill the bottom two places.

The visitors started like a rocket. 14 points up after only 6 minutes with tries by stand-off Michael Grove and full-back Matthew Boustead and conversions by centre Ashley Smith as City’s defence was ripped to shreds set them on their way.

City did get themselves into however with tries by centre Craig Dominick and flanker Peter Dent, scrum-half Paul Armstrong adding the conversions, but a further try by Park winger Alistair Blair and conversion and penalty by Smith kept his team ahead before City winger Tom Elliott scored from a ruck on the visitors’ line and Armstrong converted to narrow the deficit to 21 – 24.

It was as close as City got however. Further tries by flanker Jonny Dubois and Grove and conversions by Smith stretched Park’s lead to 21 – 38 at the interval.

Centre David Elliott got City’s fourth and bonus point try with Armstrong converting just after the re-start, but two tries by Park centre Seb Reece and a conversion by Smith took the visitors to 50 points and out of reach. To City’s credit though, three tries in the last quarter of an hour through Dominick, Armstrong and winger Ellis Hook with one conversion by Armstrong reduced the losing margin to just 5 points and with it secured a losing bonus point as well.