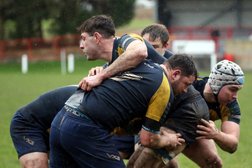 With the rapid spread of Coronavirus over-shadowing everything this may possibly have been the last North 1 East League Saturday.

With the rapid spread of Coronavirus over-shadowing everything and speculation rife that the current season may be curtailed with four rounds still to go, this may possibly have been the last North 1 East League Saturday.

If that proves to be the case, Durham City, in their fight to avoid relegation, did their cause no harm with this bonus-point win over bottom club Huddersfield YMCA, an outcome which lifts them from 12th to 9th position albeit on points difference.

The match was no classic however. Seven tries to three in City’s favour suggests a comfortable margin of superiority, but in reality this was a pretty evenly-contested affair and the visitors’ propensity in recent weeks for poor defending and making basic errors could easily have cost them more than it did.

They went behind in the first minute, poor tackling allowing home stand-off Sam Fletcher-Tennant to run and break before lock Jack Housley crashed over from the subsequent phase play near the City line. Full-back Haydn Quigg converted and Huddersfield had the ideal start.

It was not until the 9th minute that City got their hands on the ball, a good attack taking play into the home 22 and good pressure ending 3 minutes later when centre Craig Dominick broke following a lineout and linked well with partner Garry Izomor before winger Tom Elliott took an offload to force his way over for their first try.

Flanker Peter Dent added the second after 20 minutes when he took an offload from No.8 Dominic Warby who drove to the line from a 5 metre scrum, scrum-half Paul Armstrong converting, and they looked to be clear at 19 – 7 when full-back Nathan Bushnell ran from depth and the move was carried on by Tom Elliott and lock Chris Metcalfe for Armstrong to eventually score and convert.

However, Huddersfield’s reply was almost immediate as Fletcher-Tennant again broke cleanly to send flanker Jack Tindale over under the posts, Quigg converting, but as half-time approached City secured the 4 try bonus point and stretched the lead to 24 – 14 when they robbed a scrum and Izomor made progress on the left before feeding winger Ellis Hook to score.

Big pressure by the home side and persistent offending by City at a series of 5 metre scrums resulted in the award of a penalty try to the home side after 49 minutes to reduce the gap to 24 – 21 and whilst both sides huffed and puffed thereafter, it was City who took the honours with 3 further tries , the first by hooker Will Elliott from a driven lineout, the second by Dominick from turnover ball and a good run by Izomor and the last, as the ball went loose in the closing minute and Hook hacked it to the home line for replacement winger David Elliott to score as he followed up and complete a good day for the Elliott family as all three brothers registered tries.