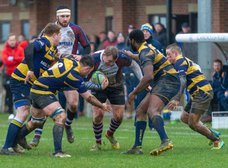 With the 2 named storms wrecking all the City and University pitches on Friday and Saturday, all home games in Durham, including matches against teams from Argentina and Scotland, were cancelled. Amazingly, the 1st XV game away at Scarborough was still on and the North York Moors were not snowbound. Both teams retired the 11 shirt and a minutes applause was held before the kick off in respect of Jack Jeffery, the Evesham player who sadly died on the pitch last week.

City got off to a poor start as Scarborough made two clean breaks through weak defence for two converted tries within the first ten minutes. This was followed by a yellow card when one of City's second rows did not lower a Scarborough player to ground after fielding a high ball. City came straight back with a short range by Peter Dent, duly converted. A second yellow card followed when one of City's centres pulled back on the opposition player chasing a kicked ball; this also resulted in the award of a penalty try. The half time score was 21-7, and despite playing the half with 14 players for 20 minutes, it felt that City were still in it.

For the majority of the second half City camped in the opposition half but constant turnover ball and missed tackles across the pitch gave Scarborough the chance to break through and score further a four converted tries. The last ten minutes saw concerted City pressure on Scarborough when Josh Cotton burst through a tiring defence for a converted try, making the final score 17 -14. City play has certainly improved since Christmas; hopefully the good results and performances of the last few weeks will return.