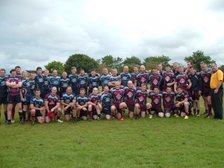 The Club was started by 3 people, Atholl Garden who at the time was PE Teacher Dyce Academy, Steve Holmes a Financial Director of Loffland Brothers and Gus McVey the Manager Bank of Scotland Dyce. A public meeting was called by these 3 Gents which was held Old Skean Dhu, in the summer of 1983.

Quite a few players joined the club from the Dyce Academy School Team that Atholl had coached that was a pretty successful School team. Other players came from the local community, local businesses and there were quite a few Students. The club started off playing Friendly's with the first games played from season 1983-84. Dyce RFC were then admitted to the Aberdeen District League, Division 2 and gained Promoted to Division 1 a few years later by coming second behind RAF Kinloss. Dyce also that year was runners up to RAF Kinloss in the league cup. Before the formation of the North District League we played 1 Season in the Midlands District League in 87-88. Dyce RFC toured regularly to the Isle of Skye every Easter from about 89 - 94 and Lerwick. While Dyce has not won many tournaments they have been active participants in 7s but have won the 10s tournament held by RAF Buchan in year 95.

Dyce RFC changed playing name to WestDyce RFC to promote the area of Westhill and the playing ground Westdyke Leisure Centre. While the team of old were pretty successful for a social team the more recent years has not been as rosy, where playing number had dropped. In the last 2 years Dyce has seen a bigger interest in rugby, thankfully with the introduction of a full committee and coaching personnel, the club is starting to come good with greatly improved training and playing numbers. With the club playing in the new National Caledonia League 3 NE.

To celebrate the 25th Anniversary of the club we had a full days activity planned on the 15th Aug 2009. There was a President team made up of all the old players against the current captain's team, this was played at the Westdyke Leisure Centre in Westhill. It was followed up by a dinner dance which included guest speaker Kenny Milne (Last Scotland hooker to win the Grand slam), Comedian Claude Bols and supported by ceilidh ban whigmaleerie. The Dinner and Dance was held in the Britannia Hotel Bucksburn with a signed Scotland top raffled off to contribute to club funds.

Part of the former players returning to play included Mike Brodie who now lives in Dubai, he has carried on his Refereeing duties with the Arabian Gulf Rugby Refs Association. He has officiated as a '4th Official' at International Matches at 4 Dubai 7s and at the 7s World Cup in Dubai in March this year including the Men's Bowl Final and Women's Cup Final.