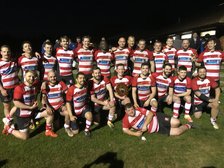 Earlsdon RFC beat Mids West 2 South, RFU Midlands Intermediate Champions and Twickenham RFU finalists by 12 points to 10 in a very hard fought tight game played last night under floodlights at Old Leams RFC.
Tries from Sam Chare and Mo Kemoko and a conversion from Mickey Moore was enough for Earlsdon to win the Shield for the third successive season. Kenilworth threw everything at the Red & Whites but the defence held firm.
Plenty of beers and celebrations after the game but not too many as the Earlsdon boys fly off to Benidorm on tour tomorrow afternoon where they will play their last game of the season in a friendly in Valencia.