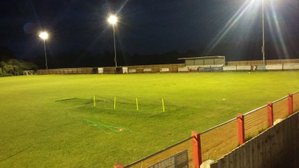 The floodlight system has finally been tested and Sports are pleased to confirm that light readings comply with our planning application and so we will be good to go for the 2017/18 season. Some videos of the ground under lights can be found here (not the best quality). An 88 point test across the pitch confirmed that everything was in working order and the light certificates can now be sent to Cherwell District Council and the FA which will complete the project. Easington opted for MUSCO lighting for the installation and they will now guarantee the light levels on and off the pitch for the next 10 years as part of the package.

The management committee had hoped to put off this test until the nights were a little darker and so do apologise to the local residents for having lights on between 10-10.30pm. Under normal circumstances, Easington will kick off at 7.30pm for mid week fixtures and are only permitted to have the lights on for 12 midweek matches during a season. First team matches at the weekend during the winter months will see the second half played under lights whilst the reserves will have adjusted kick off times which will mean the lights will not be in use.

Exciting times and a vital ground grading improvement which means that Easington can remain in the non league pyramid for the foreseeable future!