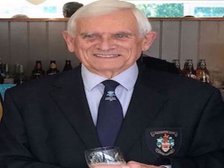 It is with great sadness to announce that a great Stalwart of Eastbourne Rugby Football Club Peter Lloyd has passed away.

Peter joined in the mid-seventies bringing his son to the first Mini training sessions initiated by Jerry Cowell in 1977.

He then became a coach for the club training and encouraging players at all levels.
He managed the 1st XV from 1992 to 1995.

He was Chairman from 1997 to 2000 and President in 2009. He also contributed to the club’s involvement with the local authorities and was able to give advice on the constitution and other legal and commercial matters.

He supported the Veterans XV on its many tours in the 1980’s and made a cameo appearance on the wing in France at the ripe old age of 53. He also wrote match reports.

His initial work with John Ager in 2007 led to the establishment of the Patrons Association.

Chairman Fraser Brooks commented “Peter was always my “Go to man” when I needed advice or just someone to run and idea by with, having held almost every position within the club, his depth of knowledge and passion for the club to keep moving forward was unmeasurable” I will miss him dearly.

ERFC have received many tributes from other rugby clubs across the county and beyond, a recognition of the outstanding contribution he gave to the life of Eastbourne Rugby club and the game as a whole.