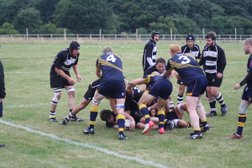 Mal Chumbley was confident that the Blue and Golds would give their opponents a stiff test on the first day of the Season But, given that the home side had narrowly beaten last year’s league winners, Burgess Hill in a pre-season friendly the week before

Pulborough started well and early pressure found them on the Eastbourne line and within five minutes they had scored a pushover try and converted it. At this point Eastbourne summoned their strength and determination and kept Pulborough at bay for long periods. Most of the first half was spent in the homeside’s territory and pressure from the visitors gave them penalty chances. But two kicks went wide.

Honours remained even until just before half-time when scrappy ball from Eastbourne gave Pulborough a chance which they took with both hands. A kick ahead led to a try and a narrow conversion the ball curling in at the last moment to give the hosts a fourteen point lead. Josh Imich had to leave the field with an injury.

At half-time, all was not lost and despite further injury to Luke Sage and some positional changes Eastbourne were confident of being able to fight back.

Despite good work in the pack Eastbourne were not getting the ball out quickly enough and good tackling by Pulborough led to mistakes in the handling. Within ten minutes excellent running and passing by the home side led to further tries, one of which was converted. The score was now 26-0 and Eastbourne were struggling to make ground and score points.

Some good covering by Paul Keen at full-back saved the day on a number of occasion and Eastbourne’s back-row forwards Luke Turner and Captain Tom Redman put in some driving runs. Joe Bettles and second-row Motty Mottram were frequently in the thick of the action and Adam Tennant made one or two excellent breaks. The addition of Rob Light to the line-up added experience and determination. But the young, fleet-of -foot
Pulborough boys were at their best, giving each other great support to bring in two more tries.

With ten minutes to go it was 40-0. Eastbourne drove down field towards Pulborough’s line and good work from the pack led to a deserved try by veteran Rob Light, showing great grit and spirit.

The conversion failed but Eastbourne finished on a good note. Of course, it wasn’t the result Mal had envisaged but despite the defeat and the work that needs to be done there were some heartening performances and encouraging glimpses of what Eastbourne knows it is capable of. Man of the Match Adam Tennant.

Next week the Blue and Golds face Lewes II at home at 3 p.m.