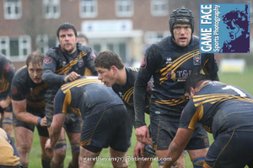 Eastbourne were able to bounce back on Saturday after the disappointment at Pulborough and register a bonus point win against local rivals Lewes.

Here is a side with a great deal of potential but this was a scoreline that could have been so much better had fewer penalties not been conceded and above all else, fewer scoring passes dropped. When they really do put their game together, this Blue & Gold XV will be unstoppable.

The match was preceded by an excellent display by the U9 age group. A solid start was needed against a fit, young Lewes side and yet within 2 minutes a drop goal and then a penalty had given the opposition a six point cushion. However, the dominance of the Eastbourne scrum soon began to exert itself and the front five applied massive pressure at every set piece which quickly sapped the strength out of their opposing numbers. This, combined with adventurous half back play by the youngsters, Hunt and Stephenson, began to give Eastbourne the edge in all aspects of play. Steve Clark in the centre looked to be in imperious form and when Adam Tennant burst into the line following another mighty shove, he created the extra man and Luke Sage was able to touch down under the posts; the half time whistle saw a 7-6 home lead

Substitutions for the second half brought fresh legs onto the pitch and although numerous scoring chances went begging, it was the forwards who were able to bag the bragging rights on the score sheet. Three tries from big No 8 Luke Turner and a conversion and penalty from Tennant completed the rout. Towards the end, Lewes had to resort to uncontested scrums and this removed the advantage from the home side. Importantly, though the fourth try gave the bonus point which was the least the players deserved. With better handling and fewer penalties, the season should go to plan.

Man of the Match - in defence and attack, Steve Clark