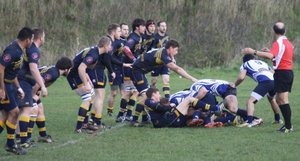 With conditions firm underfoot and little wind to disrupt play, both Brighton and Eastbourne were eager for an aggressive display of running rugby. Both teams had had mixed fortunes recently and had a point or two to prove.

With Steff Cousins at number nine and solid kicking practice behind him hopes for some successful shots at goal were high. Brighton started well with their powerful backline and good passing movements. Eastbourne made a few forays into Brighton territory but the home side were able to clear their lines efficiently. The score line remained level for a quarter of an hour as the sides fought for supremacy in the midfield. But then a good Brighton passing movement led to an unconverted try.

Early on Aaron Stevenson was demonstrating an ability to kick long and effectively. Chilvers and Light were able to inject some aggression and momentum into Eastbourne’s play and captain Tom Redman popped up time and time again to push play forward for the visitors. Also Matt Hallyar was active in spoiling Brighton’s plans. Good turnover work by the scrum with Liam Eyre doing some great charges upfield led to penalty chances for Cousins. Just before half-time he was successful. The score stood at 5-3 at the break.

Despite some good long kicks and repeated pressure by Eastbourne the home side were having the better of the play and again after another fluid passage of passing Brighton touched down again. The kicked failed once more. Liam Eyre went off with a head injury and Matt Webb replaced him. Good tackling by Eastbourne kept the opposition out for a while but with twenty minutes to go Brighton touched down for their final score, another unconverted try. The score was now 15-3 and despite desperate attempts by the visitors the hosts were able to pin them back. Long kicks landed threateningly in the Eastbourne 22. Some safe gathering by Carl Slaughter and Jack Linscott saw encouraging counter-attacks which came to nothing. Eastbourne’s scrum remained solid, as usual , but the line-outs were, on occasion, less successful.

All in all, Brighton’s attacks and solid defence were the difference between the sides.

The Nomads (Eastbourne 2nd XV) saw off Brighton III’s in style at home and the Eastbourne Phoenix (III’s) went down fighting to Seaford II’s by two points.

Next week the Club celebrates its Full R.F.U. Accreditation with a lunch at Hampden Park. Among the guests are the Mayor, Councillor Mike Thompson, the Right Honourable Stephen Lloyd M.P. and the President of Sussex R.F.U., Ken Nicholls.