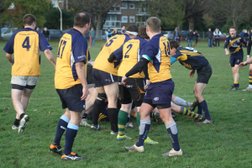 Eastbourne Rugby Club enjoyed its best Saturday of the season to date marked by a number of notable events.

A superb pre match lunch for 52 guests including the Mayor and our constituency MP; the presentation of the RFU Accreditation to the club; U16 player Dimitri Aitken winning the BMW Young Player award and victory singing late into the evening led by operatic baritone Mike Barker. And above all, a league victory by 10 tries to 2 in emphatic style.

Coach Mal Chumbley had called for a more attacking performance from his side and although the first half was evenly matched, his players certainly responded after the interval by running in eight tries in an electrifying second half. There were errors of course but far fewer than in recent weeks and from prop to full back every single player gave 100%. The front five took four scrummages against the head and decimated their opposite numbers; the back row was outstanding with Redman, Curtis and Skeet all catching the eye. Scrum half Matt Stevenson played a truly class game and the backs missed only one tackle all afternoon and always looked dangerous in attack.

The first score came after only 3 minutes play; an unstoppable burst by Cheater then Stevenson putting Tom Redman in for five points. And it was the elusive Stevenson who scored the next after taking a quick tap penalty. Meanwhile however, Holbrook had showed flashes of fine play with two tries of their own to take a 10-12 lead into half time.

The half time talk from Chumbley must have been the required tonic because a great catch and bullocking run from Joe Skeet led to a follow up score from Andy Curtis. This after the referee had barely blown for the restart. Thereafter, tries came at regular intervals for the Blue & Golds who seemed to get better with every attack.

Martin King got his first followed in quick succession by Joe Bettles, Stevenson with a further 2 scores to reach his hat trick and then Rob Fenner after a sensational off load by Skeet. Perhaps the pick of the afternoon`s tries came to bring up the half century when smooth confident handling led to a classic try for winger Carl Slaughter. It was left to Martin King to round off matters after another heel against the head in the scrum. Three of the tries were converted; two by Aaron Stevenson and one by Stefan Cousins

After a fallow few weeks, this reward was richly deserved and confidence restored. Redman leading by example and showing real leadership qualities was voted man of the match