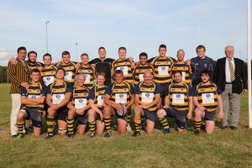 A Win for Eastbourne 1st XV but work to do...

After the exuberance of the previous week`s victory over Holbrook, Eastbourne were forced into an untidy arm-wrestle against Lewes 2nd XV which resulted in a victory by the narrowest of margins.

Lewes proved to be a stubborn opposition who refused to surrender anything to the more skilful Blue & Golds. The result was a game that was never attractive but Eastbourne will be pleased to return home with the victory which keeps them in the top three in the Sussex Spitfire league.
The pitch at Lewes always takes its toll - heavy and clinging - and the early exchanges seemed to get mired down. For too much of the time the ball appeared stuck to the ground with neither side able to dominate the breakdown. Slowly however, it was the home side who began to exert pressure and slick handling by the Lewes fly-half and the three-quarters outside him, led to the first score when the left wing touched down in the corner.

Perhaps Eastbourne need to fall behind because the riposte was swift. Lewes conceded a penalty which was expertly kicked to touch in the home 22 metre area. Good lineout work by Redman and an initial forward drive saw full back Jack Linscott enter the attack at pace and carve through the Lewes defence to level the scores. Eastbourne then had to endure 10 minutes with 14 men when Aaron Stevenson was shown the yellow card for trying to protect his brother Matt - a little too robustly for the referee. The remaining minutes of the first half were only enlivened by a scintillating burst by hooker Joe Bettles who was enjoying a fine game. His speed made 50 metres and the follow up by Curtis and Turner could so easily have led to a further score. To their credit, Lewes repelled the move and went into half time at 5 points apiece

Sad to say, the second half was little better in terms of excitement. Too many penalties were conceded by both sides and given Eastbourne`s recent strike rate with the boot, the Eastbourne faithful spectators were rather nervous about their side`s prospects. Although Lewes went ahead initially to take an 8-5 lead, a well struck kick from the tee by Aaron Stevenson levelled the scores again. And with the minutes ticking away, one further penalty was conceded by Lewes and Stevenson was able to repeat the success and give the visitors victory.

`Winning ugly` is perhaps the best phrase to summarise the match. The team will hope to be back to form in next Saturday's cup game over at Hastings & Bexhill.

Man of the match awarded to Joe Bettles for a fine all round game.