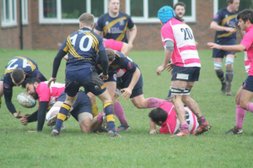 Wearing their distinctive new strip, Crowborough gave the Blue & Golds a sterner test than of late but the home side still ran out by seven tries to three.

In difficult conditions created by a swirling wind, both sides gave a decent crowd an entertaining afternoon with the spoils deservedly going to Eastbourne. With promotion now looking less likely, it was important to maintain the previous week`s scoring rate and this time it was winger Nick King who was the prime beneficiary with a hat trick of early tries that provided the platform for another big win.

In the first half, Eastbourne having established a 5-0 lead put themselves under unnecessary pressure when a kick was charged down allowing the Crowborough prop to equalise. Minutes later, however, pressure was relieved after a quickly taken tap penalty moved the ball through several pairs of hands before finding King with a timely run-in for his second. With fly half Stefan Cousins finding an easy rhythm, it was not long before King got his third, Cousins converting for 17-5.

Time and again, Crowborough forced Eastbourne backwards and on the half hour, some robust rucking created space for the visiting centre to burst through and keep his side in the game for 17-10. However, with the whistle poised for half time another bullocking run by No.8 Joe Skeet put him on the scoresheet and sent Eastbourne to the turn-around twelve points ahead.

In the second half it was Eastbourne who used the conditions to better advantage. The kicking from hand improved as the game went on and although big hits took their toll, the clever use of rolling substitutes paid dividends for the home side. Tight head prop Matt Webb proved again that he is unstoppable over a short range and second row Chris Chilvers managed two sidesteps to get himself onto the scoresheet for the second consecutive game. Both tries were converted by Aaron Stevenson who had assumed kicking duties. Although it was the visitors who scored the final try, it has to be said that this was against the run of play and not before Jack Linscott had skipped over for Eastbourne`s seventh and final score.

Coach Mal Chumbley was away on international duty but skipper Redman will be reporting a pleasing day to reach 99 points over two games and also a comprehensive win for the second XV on the adjacent pitch. Big games in February against Chichester and Crawley may determine the final table placings