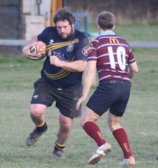 For both sides, this rearranged match was crucial, Crawley knew what they had to do to beat Eastbourne and secure League runners up place.

And although the Blue & Golds will feel disappointed, they will know that they were beaten by a superior opposition on the day . Crawley had size and strength in their pack but Eastbourne were more than able to match this at scrum and lineout to good effect. But the game was won behind the forwards where young Crawley players at scrum half, fly half and outside centre showed real pace and urgency to take the attack to the visitors.

Eastbourne got off to the worst possible start after a dropped ball at the kick off led to an instant try. However the riposte was immediate; after great work by Nick King down the middle, Luke Sage was able to touch down for 5-5. For the remainder of the first half however, it was all Crawley. A loose Eastbourne kick from defence led to an easy score and within a five minute period, two further tries led to the half time turn around at 24-5. Eastbourne looked to be out of the game.

Whatever was said during the break certainly had the desired effect. Cousins came on from the bench and made real impact. Within 5 minutes of the restart, a great offload by No.8 Joe Skeet led to a fine try for flanker Curtis. This was duly converted by Cousins. However a stupid penalty on the 5 metre line allowed the big Crawley second row space to crash over and restore the gap in favour of the home side. As Eastbourne began to tire, so tackles were missed and the home lead was stretched to 24 points after some half hearted defence. But it was Eastbourne who, to their credit, never really gave up, and when Stefan Cousins spotted a tiny gap, he was through in a flash to dot down under the posts and convert his own try.

Six tries to three means that Eastbourne will remain in Sussex Spitfire league next season but they will take plenty of positives from this game; there was no lack of effort and the focus now should be on the final three games of the season on March 22nd (Brighton at home), April 5th (Holbrook away) and April 12th (Pulborough at home)