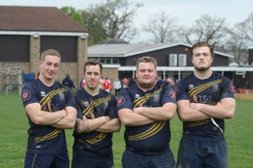 Eastbourne Claim another Victory Away from Home

After a convincing performance against Brighton II’s the Blue and Golds looked forward to their penultimate league fixture at Holbrook.

Having beaten their opponents in a second-half deluge of tries in December, Eastbourne knew they would have to maintain a good defensive game as well as a steady stream of possession to ensure a good score-line. Holbrook started very well, pinning the visitors in their 22. A good break-out by Eastbourne nearly led to an opening try. Despite an injury to Luke Turner the Hampden Park boys were beginning to dominate the scrum and stifle any Holbrook efforts. After battering away at the home try-line Joe Skeet, playing his usual forceful game at No 8, crashed over for a try converted by Nathan Ring. A few minutes later Eastbourne stole possession from their hosts and Matt Hallyar touched down; then just before half-time Jack Linscott intercepted a pass on his own 22 and raced away to score under the posts. Nathan Ring converted to give Eastbourne a 19-0 lead.

Five minutes after the interval a good move by the visitors’ backs led to an unconverted try by Nathan Ring. Passing movements were going well from quick possession and a dominant pack. Good runs by Liam Eyre and Tom Redman aided the good tackling all-round, the Blue Golds advancing on the Holbrook backs to halt any chance of counter-attacks. One intercept near the Eastbourne line, however, led to a first score for the home side. But Eastbourne led 24-7.

Then twenty minutes into the half a classic backs move sent winger Nick King over for another try. A few minutes later a lucky bounce saw Holbrook respond with an unconverted try.
Eastbourne, however, were not finished. Jo Skeet added to his first half try and Nathan Ring converted. Finally, some good interplay between backs and forwards again saw Nathan Ring score his second to end the match on a very satisfying note.

In all, the forwards overpowered their opponents with confidence and skill. Despite a number of penalties Eastbourne were able to capitalise on excellent, clean possession and tire the opposition out.
Holbrook suffered a number of injuries through the game and were outpaced by the livelier Blue and Golds. It was a pleasure to see Eastbourne running intelligent lines, giving good support and off-loading quickly. Their tackling was decisive from scrum-half to wing; good counter-attacks and excellent turn-over ball led to effective possession.

Next week Eastbourne 1st XV’s final league game is at home at 3 p.m. against Pulborough, the unbeaten leaders of Sussex Spitfire One. Eastbourne remain in 3rd position. The Nomads are away to Heathfield and Waldron III’s and still on course for promotion.