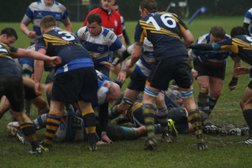 With a forecast of heavy rain the encounter in Hastings would be a difficult one for two teams near the top of their respective leagues.

Eastbourne took a strong side and were hoping to perform well away from home. After a close match at Lewes in tricky conditions the previous week they were confident of matching Hastings on the windy heights above the town.

Early exchanges were even in the increasingly difficult heavy rain and high winds. An injury to Richard Barron, tackling with his usual ferocity and total commitment, left the visitors short of a good prop.
Handling became tricky and the ball slipped along the ground like an errant bar of soap in a swamp. Kicking was even riskier as the wind took the ball in totally unpredictable trajectories. Hastings sensibly kept the ball to hand and supported well. But Eastbourne defended valiantly and kept the ever-dangerous Hastings at bay.
Awarded a penalty the home side kicked for goal. The ball fell short and poor handling and decision-making by Eastbourne led to a try for Hastings under the posts. The conversion scraped over the cross-bar. 7-0 to the hosts.

Defending well Eastbourne were giving little away but also making little progress upfield towards the home-side’s try-line. One foray led to a penalty some twenty yards out which Aaron Stevenson slotted over. 7-3 to Hastings.

Another defensive error, Eastbourne failing to clear their lines from a scrum near the posts, led to Hastings driving over the line again and narrowly converting to give them a 14-3 after a long first half extended for stoppages due to injuries.

As the weather continued to worsen the play became a desperate battle for possession and territory. Despite good surging runs from Joe Skeet and Tom Redman, good fielding of loose ball by Jack Linscott and Carl Slaughter, the visitors made little headway and were pinned back in their own half for much of the second period of play. And Hastings pounced on any loose ball.

The home side matched Eastbourne in the set pieces and stretched them in the loose. Injuries to Chris Chilvers and Andy Curtis weakened the visitors. Moreover , Hastings showed great determination and organisation in their attacks. Only infringements at the last moment stopped them from scoring more tries. Eastbourne made few telling incursions into Hastings territory after the interval.

The final whistle blew on a match wrecked by the weather but well-refereed and played in a good combative spirit.

The team now takes a well-earned rest over Christmas before the next match against Rye at home on 4th January.

Man of the Match - Liam Eyre.