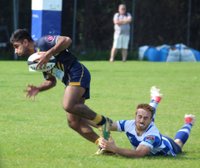 Eastbourne Travel to their 1st Pre-Season

The first match of the current season took Eastbourne to Hastings for a friendly contest against their newly-promoted local rivals.

With various players missing due to holiday and other commitments the visitors had managed to put together a mixed fifteen of first, second and third team members. Despite the untried nature of this combination the Blue and Golds were determined to put on a vigorous display for their small band of trusty supporters who included two members of the board and the president. The fine weather and firm pitch offered the prospect of open running rugby. The match proved to be an even, competitive and enjoyable affair. With its makeshift pack Eastbourne did well to hold the Hastings eight whose power increased as the match went on. After some twenty minutes with play moving from one end to the other as each side attacked with energy and enterprise and each team defended with equal commitment and courage, the visitors were awarded a penalty some twenty metres from the Hastings line. Nathan Ring, having a good day with the boot, struck the ball perfectly and put Eastbourne ahead. A few minutes later as Hastings threatened the Blue and Golds' line Eastbourne were penalised and the home side drew level. In the second period of play Hastings put pressure on the Eastbourne scrum with such energy that their hard work led to a penalty try. The score stood at 10-3 which was not a true reflection of the equal effort put in by both sides, however. After pressing hard for twenty minutes Eastbourne's endeavour was rewarded with a try by Luke Thomas, the result of combined work by backs and forwards with a superbly timed pass by Nathan Ring leading to the touchdown. Ring converted magnificently from way out. In the last period of play Hastings scored again and converted. They led again 17-10. But despite this deficit Eastbourne were not finished. At the very end Paul Keen, the evergreen veteran, ran in a fine individual try which was then converted by Nathan Ring. Honours were even as the final whistle blew.

Despite the mix and match combinations, new half-backs, new players and a new season in a different league Eastbourne can be justly proud of this opening performance. The team was ably led by Tom Redman, there were some powerful charges by Tyler Bowry, recently returned from New Zealand, and a welcome for new backs such as Karl Platell and Josh Buckwell. Defence was solid and once the side has time to create its own attacking strategies this should be a fine team. We look forward to a promising and exciting season with new coaches Steve Clark and Ady Norwood.