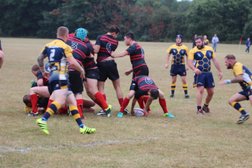 Despite the cancellation of useful pre-season fixtures and the disruptions caused by the absence of players due to holiday and work commitments, Eastbourne Rugby Club were able to offer a strong squad to fill all three teams.

At the last minute Crowborough and Seaford were unable to put out sides to face the Nomads skippered by scrum-half Ed Longton and Danny Craven's Phoenix 3rd XV. This, however, meant that the 1st XV were able to take a good team away to Park House in Bromley. Stalwarts Pysden, Clarke and Farley were in the match-day squad alongside youngsters Rokan, Hills and Quinn. Matt Webb and Dicky Barron returned to the 1st XV after a prolonged absence propping with versatile and experienced Nathan Ring. Newcomers included Gareth George, a well-qualified coach and brother to English international Jamie George. Toby Hills in the second row is a home-grown Eastbourne product, having made his way up through the mini and youth ranks. There was also a welcome return also for Dominic Groenen following his productive years at East Grinstead. After the usual long and tedious journey in heavy traffic through Kent the team and its supporters arrived in good time to prepare for the match on a very firm and dry pitch. Eastbourne started well demonstrating its front-five strength and willingness to attack at every opportunity. Despite giving away too many penalties the visitors were able to capitalise on careless covering by Park House and after a mere ten minutes Steve Clarke was able to intercept a ball to touch down near the posts. Ben Barter converted. However, some thirty minutes into the game Matt Pysden suffered a dead-leg and had to be substituted. On came Jon Warner. It took time for the team to settle again. Ten minutes into the second half Sid Hiremutt had to leave the field with a head-injury. Mo Rokan stepped up and played his part in attack and defence. A few minutes later Park House ran in a well-deserved try which was converted by their very able full-back. As the constant drizzle turned to heavier rain a few handling errors crept in, but overall the passing and gathering of the ball especially from high kicks was of a good standard. Any errors, however, were always pounced on by both sides. Despite repeated incursions into opposition territory Eastbourne were kept out by good defence. Some ten minutes before the final whistle Ben Barter was able to slot over a penalty and Eastbourne kept up the pressure both offensive and defensive to come away winners at 7 points to 10. The pack were excellent and despite some very good individual performances the Man of the Match went to the front-five. Next week Eastbourne face local rivals Lewes and will be looking to improve their play and demonstrate more convincingly their great array of skill and talent.