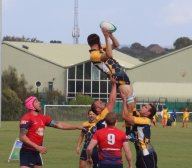 A great performance by Eastbourne

The Blue & Golds turned the tables on their visitors from Aylesford and in a fine all round performance, reversed the result from last year.

The Blue & Golds turned the tables on their visitors from Aylesford and in a fine all round performance, reversed the result from last year. After conceding the early exchanges and riding their luck through Aylesford`s failure to take the final pass, Eastbourne turned the screw and eventually ran out comfortable bonus point winners. Of particular note was a number of enforced positional and step-up changes to the selected side as a result of injury. Chilvers, George, Smith and Sweet all acquitted themselves with credit; if this kind of performance can be maintained, a top four position looks very likely.

Playing up the slope in the first half, the Eastbourne eight ground out the hard yards and when Redman won a 5 metre lineout, Pysden`s quick passing across the line saw Charlie Smith, playing at centre, score the first try. Minutes later, another line out at the same point; this time the forwards drove the maul forward and Chris Chilvers touched down. Both tries were converted by fly half Barter and at 14-0, the game had edged towards the home side. However the Aylesford riposte was instant; defensive hesitation and a beautiful offload from the big second row, put the visitors in under the posts. 14-7 and a few minutes nervousness crept into the home game. However a startling break by Charlie Sweet cutting in from the left wing thrilled players and spectators alike; the sweetest try of the day restoring a 14 point lead.

By the start of the second half, linkage between forwards and backs was a delight to watch and with the wind and slope in their favour, further scores looked inevitable. Aylesford were penalised at a scrum and Barter kicked the 3 points. However a difficult 10 minutes was to follow when skipper Clarke was sin binned for retaliation to a high tackle. The defence remained secure however and breakout running by Webb was only halted short of the line. The resulting clearance kick was picked off his toes by Sweet who skinned his opposite number and passed inside for Redman to score. Barter missed his only kick of the afternoon but was able to finish on a high when he converted the final Eastbourne try scored by full back Joe Wynne in a move that encompassed the whole width of the pitch. By this time all 3 substitutes were on the field making the difference that fresh legs can bring.

Man of the match for an outstanding performance; Charlie Sweet