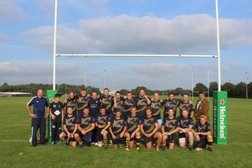 A close win for Eastbourne

Eastbourne made the long journey to Gillingham knowing they would be facing a strong and physical side currently sitting in the lower half of London South East 3 but having recently produced some impressive results and displays.

A game that was always going to be tough for the blue and golds was made even harder for them being on the receiving end of 5 yellow cards and 1 red card throughout the duration. Eastbourne started brightly with the forwards dominating the Gills pack and stalwart prop Matt Webb showing his extraordinary turn of pace and sublimed handling skills which broke the Gills defence on several occasions throughout the afternoon, this lead to the first infringement of the day and a penalty to Eastbourne with fly half Ben Barter coolly slotting the ball over the posts for an early 3 point lead. With several promising breaks made by Eastbourne, frustration was creeping in as their efforts as yet were going unrewarded. On the 20 minute mark the impressive Joe Wynn was forced to leave the field through injury and Jack Linscott took over the number 15 shirt with Sid Harmett taking his place on the wing.

The impressive Gillingham 15 was awarded a penalty some 30 meters out and slotted the 3 points with ease. 3-3. After a flurry of incidents from both sides, the referee had no alternative than to show the first of the Eastbourne players to the sin bin. With now 14 men on the field and 10 minutes of play remaining of the first half, Gillingham took this opportunity to break through the Eastbourne defence to score under the posts. With the conversion achieved the score now 10-3 to the home side. With only a 5 minutes of the first half to go, Nick King was somewhat surprisingly sent to the sin bin for an unknown offence, Eastbourne would look to start the second half with 14 players. Eastbourne now playing up the steep pitch with the heavy wind in their faces continued to press the Gillingham defence and Barter was almost over the line after a superb charge down only for the ever present Gills full back to be able to clear his lines. With injuries now occurring for the Eastbourne boys, players were having to start to change their positions but in spite of this continued to press the home side at every opportunity. With yellow cards following like Dominick Groening’s hair, Eastbourne were very shortly under extreme pressure from this physical Gillingham side who kicked cleverly to allow for a catch and chase by their 15 again to secure another 5 points. With the conversion going wide the score now with 20 minutes to play was 15-3 to the Gills.

From the restart Eastbourne secured the ball and started to play to their own style of rugby with the ball finding its way to Charlie “Wheels” Sweet, who’s only job was to run the whole half of the pitch, uphill, and beat 4 Gillingham players, of which he did with ease placing the ball over the line. The conversion went just wide, the score now 15-8. Almost from the restart and after further colours of yellow being displayed, the Eastbourne players were at one point playing with 13 men on the field. This allowed Gillingham again to take advantage of the inevitable space and secure another 5 points from a well worked try. 20-8. With sheer determination, Eastbourne attacked the Gillingham defence once more and were rewarded with another 5 points for their efforts and a superb conversion from far out on the right wing by Nathan Ring took the score to 20-15 with about 4 minutes of play remaining.

From the restart, Eastbourne were award a penalty which Garth George, now playing at fly half, found the touch line just outside the Gillingham 22m line. The referee had indicated that there was enough time for the line out to happened and Eastbourne secured the ball and set up a rolling maul driving the Gillingham players backwards with Nathan Ring going over in the far right corner to bring the scores level at 20 – 20. Ring was now faced with an almost impossible kick from virtually the touch line and some 35 meters uphill together with this being almost certainly the last kick off the game, he made the purest of connections to see the ball fly through the dead centre of the posts. 20-22. From the restart Eastbourne caught cleanly, cleverly kept possession and finally found a kick to touch to win this dramatic and incident filled game.