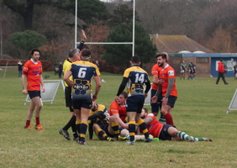 Eastbourne were looking to end their three game losing run and start the seasonal festivities with a win against Folkestone who started the match at Park Avenue just above the home team in fifth place in the league table.

Playing down the slope and with the benefit of a strong breeze Eastbourne started brightly. Tight, cohesive play by the forwards kept the visitors pinned in their own half for the first ten minutes. When Folkestone did manage to enter the Eastbourne half strong defensive tackling retrieved possession and a 50 metre diagonal kick by Ben Barter immediately took play back to the visitor’s 22. Eastbourne then disrupted the resulting lineout, won back possession and mounted a series of drives by the forwards that provided Dominic Groenen with the opening to score the first try under the posts. Barter converted to give Eastbourne a 7 point lead.

Folkestone gradually began to gain confidence and territory as Eastbourne indiscipline gave away a series of penalties but the Eastbourne defence was resolute until the 30th minute when Eastbourne lost Groenen to the sin bin. From the resulting penalty five yards out from the Eastbourne line the visitors opted for the scrum from which they scored. The try was converted to level the scores. This reversal spurred the home side into more vigorous action and although a man down they began to test the visitors defence. On the stroke of half time Eastbourne had their reward, forcing the Folkestone defence into a handling error in midfield that gave Max Cheater the opportunity to kick the ball deep into the opponents 22 where Charlie Sweet was able to collect it and score a try which Barter converted to give the home team a 14-7 halftime lead.

The Blue & Golds started the second half strongly, moving the ball quickly and accurately; Barter was prominent, making a series of line breaks that put the visitors defence on the back foot. In the space of six minutes they added two more tries by Matt Webb and Charlie Sweet. Both tries were converted by Barter to stretch the lead to 28-7.

However, Folkestone were again let back into the game as Eastbourne lost momentum, giving away a series of penalties and losing another man to the sin bin. The visiting forwards began to drive strongly at the depleted defence and in the final quarter they scored three tries in the space of 12 minutes. With one missed conversion, the score was 28-26 with five minutes to go and Eastbourne were fighting doggedly to maintain their slim lead.,

In the 81st minute Folkestone mounted a final assault on the Eastbourne line which resulted in the referee awarding another penalty against the home side that was converted to give Folkestone the narrowest of victories.