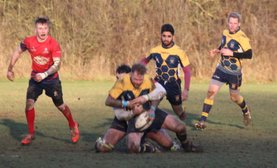 Defeat away to Aylesford Bulls

Both clubs agreed to stage this match at 2 p.m. in order to avoid the possibility of the visitors running into poor weather on their home journey.

Both clubs agreed to stage this match at 2 p.m. in order to avoid the possibility of the visitors running into poor weather on their home journey. As it turned out the weather during the game played little part in the outcome. Smarting from their heavy loss to the Blue and Golds in October and hovering dangerously near the bottom of the pile in London South East Three, the Bulls were determined to put on a good showing.

Honours were even at first as the powerful home scrum began to disrupt Eastbourne's weaker eight. After a few penalties in their favour the visitors began to infringe, thereby losing valuable ground gained. Defences were tight but both sides built up good attacking moves. Indeed it was quick ball and an excellent passing move that led to the game's first score by the Blue and Golds after a little under 30 miniutes, Lee Walker barging over for a well-deserved try. Ben Barter added the extras from a difficult angle. Some five minutes later led to a fine score by Max Cheater neasr the posts. Ben Barter was unlucky with the conversion, the ball ricocheting off the upright. And despite the heavy and effective pack facing them Eastbourne were sitting comfortably in the driving seat at half-time.

Playing into a gradually fading sun The Sussex side found themselves confronted with a rejuvenated Aylesford. The home team would not take this lead lying down and within a few minutes had crashed over after another Eastbourne infringement to score an unconverted try. Five minutes later good passing and hard determined running saw them score again and convert the touchdown to draw level. Try as they might Eastbourne could not make any progress towards the Kent line, although one scoring opportunity came their way when Aylesford infringed near their own eight-metre line. Ben Barter converted an excellent long-range penalty to give them the lead.But persistent infringements saw Eastbourne once again on the backfoot and shortly before the end of the match Nathan Ring was yellow-carded to weaken a pack already under pressure and now minus Tom Redman with a shoulder injury. The Bulls took quick advantage and scored a try which remained unconverted. As the match reached its lowest ebb a loose ball led to an interception and despite an heroic chase from captain Max Cheater and full-back Sid Hiremutt, Aylesford added to their score with a converted try. Final score 24-15.What had started as a hopeful journey culminated again in a last-minute ambush from a resolute and worthy opponent. All credit to the Bulls and their vociferous crowd of happy supporters. Eastbourne must now return to the drawing board and re-plan for the next encounter. They will rue the many penalties given away and the last-gasp defeat. Next up Gillingham on 28th January at home.