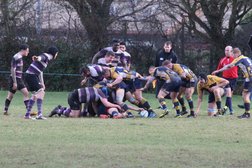 Eastbourne recorded their first win of 2017 with a well-deserved victory over the club currently two places above them in London 3 South East. Although forced to make a number of changes the team, captained by Max Cheater, put in a resolute and cohesive p

Eastbourne recorded their first win of 2017 with a well-deserved victory over the club currently two places above them in London 3 South East. Although forced to make a number of changes the team, captained by Max Cheater, put in a resolute and cohesive performance against a large and physical Gillingham side.

Gillingham started the first half playing down the slope with a strengthening wind. After five minutes of determined defense Eastbourne won a penalty that took them into their opponents` half. From the resulting throw in, the pack rumbled to their opponents` 22 metre line before moving the ball quickly first left and then right through six phases of play before Dominic Groenen collected the ball and drove over for the first try.

Following the failed conversion, Gillingham quickly used the elements to return deep into the Eastbourne half. Within five minutes of the restart they were awarded a penalty in front of the posts that was successfully converted.

As conditions deteriorated further, driving rain made the surface greasy and ball- handling difficult. Gillingham won a line out on the Eastbourne 22 metre line. Using the slope and the size of their forwards they mounted a series of charges to the Eastbourne line before finally crossing for a try wide out on the right, which was unconverted.

Undaunted the Eastbourne pack continued to exert control, matching the opposition in the set pieces and being quicker to the ball in loose play, providing possession that their backs used creatively. Most of the play took place in Gillingham territory until half time was reached with Eastbourne trailing 5 - 8.

With the rain relenting, Eastbourne began the second half using the wind to gain position in their opponents` half. Using the space and possession their pack provided they ran the ball enterprisingly. After eight minutes a quick tap penalty taken by Matt Pysden took play deep into the Gillingham 22 and resulted in a another penalty being awarded in front of the posts that Nathan Ring converted to level the scores.

From the restart Eastbourne soon returned to Gillingham territory and ten minutes later a clean catch from a lineout five yards out saw Nathan Ring driven over for Eastbourne’s second try. Again the conversion failed.

Having hit the front Eastbourne continued to press forward and in the 75th minute Gillingham lost a man to the sin bin as they desperately tried to stop another Eastbourne attack. From the resulting penalty Eastbourne setup another 5-yard lineout. An accurate throw in by Ring was collected and driven on by the pack for Ring himself to ground for his second try. A depleted Gillingham side moved the ball quickly in the dying moments but Eastbourne closed out the game.

Man of the Match was Matt Pysden.