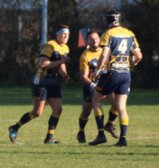 A magnificent display of skillful and determined rugby by Eastbourne

A magnificent display of skillful and determined rugby by Eastbourne saw them advance away from the relegation zone and towards mid table. The warm spring like conditions and a superb playing surface helped the Blue and Golds despite the setback of having to play 77 minutes with only 14 men.

Sheppey arrived bristling with aggression and targeted the home fly half in the first phase of play. Sadly Ben Barter retaliated to a cynical foul and was dismissed from the field by the referee; the culprit of course escaped detection and remained to see out the match. From this point on, defence became the name of the game and when three Sheppey penalties went begging, Eastbourne sensed that they could prevail. Eventually the Sheppey kicker was successful and coach Norwood must have thought that to reach half time just behind would have been a real positive. However the team had other ideas and a line out was won by Redman on the opposition 22; Gareth George controlled the maul from the back and when Pysden used the blind side, winger Billy Mustafa was there to crash over. Nathan Ring put in a huge conversion to make it 7-3 to the home side with the slope in their favour for the second half.

And what a half it turned out to be. Seven tries to none in a magical 40 minute spell starting from the kick off when Lee Walker and Charlie Smith outstripped the Sheppey defence and Smith touched down. Thereafter it was an object lesson in precision rugby with the younger team members putting in huge shifts. Williams, Hills and latterly Bacon were all immense and combined with seasoned campaigners to delight the large crowd. Tries were scored by Cheater; Groenen twice in a 5 minute purple patch; Bacon, Ring and Smith for his second. Having successfully converted 4 of the tries, it was left to Ring to bring up the half century with the final kick of the game.

Club chairman Fraser Brooks praised a complete team performance and gave man of the match to Toby Hills, whose second half tackle rate was phenomenal. At this rate, an exciting end to the season promises: next game is Old Dunstonians at Hampden Park on March 4th.