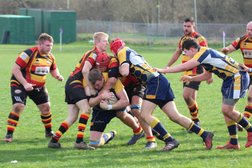 After a lacklustre performance against Old Dunstonians Eastbourne were looking forward to facing bottom-side Ashford on their home turf and gathering a few more points towards retaining a safe position in the league. The hazy skies cleared as the Blue and Golds approached the Kennington Ground and after a confident start things looked good. After an early start and a good lunch for the supporters awaiting the England Scotland clash at HQ later, the visitors settled into a series of determined attacks on Ashford's line. But the Kent side were first to score from a penalty just after fifteen minutes. A quarter of an hour later good work by Eastbourne took them to the opposition line and James Smith crashed over for a first try. The relatively easy conversion was missed. Five minutes later as Eastbourne continued their aggressive incursions Dom Groenen made it over the line for a second five-pointer. Nathan Ring added the conversion and the Sussex boys led by 12-3 at half-time. The small band of dedicated supporters watched and waited for further success. But a poor kick to touch founded its way into Ashford hands and the ball was swiftly re-cycled and carried to the other end of the field. Poor tackling let Ashford in and gave them the lead. Within five minutes good running and again poor defence gifted the home side yet another score. In the next quarter of an hour an enthusiastic Ashford, now with the bit firmly between their teeth, and sensing a famous victory, ripped Eastbourne's defence to shreds, scoring almost at will as the visitors seemed to suffer a case of collective amnesia. The Blues and Golds had forgotten how to play rugby: ineffectual tackling, poor handling, ragged kicking and lack of teamwork.

Final score Ashford 27 - Eastbourne 12. What had started on a promising note turned into a shambolic nightmare. The gloom lifted for a while after England's astonishing rout of Scotland but Eastbourne will have to get their combined act together at training and on the pitch as they face 3rd placed Thanet Wanderers on March 25th, the arduous journey on April 1st to 4th placed Folkestone (who pipped them to the post in December) and, on the final day of the season, 9th placed Park House seeking revenge for the opening defeat in Kent in September. Eastbourne have a lot of work to do to end the season with a modicum of restored pride.