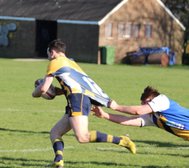 Sometimes the gap between defeat and victory can be so narrow

Sometimes the gap between defeat and victory can be so narrow...and thus it was at Hampden Park on Saturday when Eastbourne hosted the high flying Thanet Wanderers in what turned out to be a tense, no-holds barred game of rugby. After the disappointment of the game at Ashford, the Blue & Golds responded with an intensity which was a pleasure to watch. Perhaps the key factors on the day were the capricious wind and the unequal penalty count against the home side. As a spectacle though it was enthralling.

Eastbourne started by playing up the slope and with a strong tail wind. The pack won the first scrum against the head, the backs swept up the field towards a certain try when the ball was held up by a strong gust which allowed an interception and an unstoppable run by the Wanderers` backs. 0-7 with only minutes played. From this point, the game ebbed and flowed; both sides showing great skill at times and poor decision making at other times. Matt Pysden, so often the creative player at the heart of Eastbourne`s play, spotted a gap on 20 minutes and a perfect pass put Dominic Groenen through for the equaliser. Barter`s conversion was spot on.

With half time looming, things changed in favour of the visitors. Two yellow cards were shown to the Eastbourne back row which overlapped with the interval. Barter and Platt were helped from the pitch with injuries and the Thanet fly half put over a penalty for 7-10. However the deficit seemed to act as a spur and the addition of Shuttleworth to the pack gave extra forward momentum and drive. A fine spell of play ended when the mercurial Max Cheater skipped over in the corner. Against the wind, the conversion was impossible. The Wanderers kicker had no such difficulties and another penalty made it 12-13.

Thanet appeared to be running out of steam and an elusive `show and go` by Cheater gave him his second try of the afternoon. This time Charlie Smith managed to convert taking the home side six points clear. However yet another penalty was conceded and the last quarter of an hour saw a 19-16 score being defended as though lives depended on it. But in the cruellest of ways, an eight man maul pushed Eastbourne back and a try was awarded in the last move of the game. Following the unsuccessful conversion, the referee blew for game end.

A tragic loss but a magnificent display by Eastbourne for whom James Smith was man of the match.