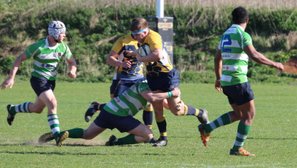 Having lost narrowly on home turf in December and with the memory of a 6 point victory last year in Kent, Eastbourne set out with high hopes.

Having lost narrowly on home turf in December and with the memory of a 6 point victory last year in Kent, Eastbourne set out with high hopes. The long journey proved to be an arduous trek. Before the match a memorial dinner was held for an old Folkestone stalwart, John Kidson who had cheerfully and warmly greeted our club officials on the previous occasion. He died recently and was remembered with wit and affection. On the pitch conditions underfoot were firm and a light breeze made for a pleasant atmosphere in the sun.

The home side, having been taken to the cleaners at Pulborough the previous week, were in an uncompromising mood. In the first few minutes they set the tone for the day's encounter with two quick tries. Eastbourne were barely able to recover from the speed of play and the attendant shock-waves. Despite a a few good attacking moves Eastbourne were only able to register a penalty by Lee Walker after some twenty minutes and despite a yellow card to a Folkestone player the visitors were unable to add to the score-line. Ominously, towards the end of an extended first half the Kent side were able to register a further 7 points. At half-time they led 19-3. Eastbourne seemed to have no answer to the powerful running and great support work shown by their opponents.

And so it was that, despite a few excursions into Folkestone territory, Eastbourne were ruthlessly battered by overwhelming waves of green and white shirts running in tries, almost at will. Eastbourne's scrum held firm, the line-out with Tom Redman skilful and athletic in his jumping performed well. But Pysden and Clark in the thick of the battle were unable to coax more out of their weary players. Time and time again Folkestone's speed and rapid passing, off-loading and support brought in the dividends. In a rare excursion into the opposition 22 Max Cheater, playing a fighting role (our man of the match) dashed in near the posts for Charlie Smith to convert. This, however, was scant consolation as the relentless try-scoring machine in green continued to break the Eastbourne defences and add to the score-sheet. Final score : Folkestone 65 - Eastbourne 10.

Eastbourne's defence was torn to shreds and led to too many easy scores. One consolation was a much lower penalty against Eastbourne. In conclusion it may be said that no doubt some of our older players who have loyally and bravely put their bodies on the line these many years will wish to hang up their boots next week against Park House: we may be saying good-bye to the likes of Matt Pysden, Gav Farley, Motty Mottram and Dom Groenen. A grizzled and battered Tom Redman and the ever speedy Charlie Smith are rumoured to be up for another season in the first team. If so, we shall welcome them back along with the new and enthusiastic youngsters who have featured this year. Among those who have impressed are Tom Bacon, Toby Hills, James Smith, Leigh Williams and Ethan Quinn. Playing their part also today with great commitment were Paul McKay, Josh Imich, Lee Walker, Carl Slaughter, Juan Antonio "Ossi" and Tom Shuttleworth. It was a difficult day for all concerned, including the tiny band of loyal spectators. Let's hope there will greater and more numerous support next week at Hampden Park for the last game versus Park House.