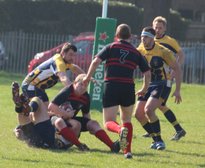 Emotions ran high at the end of this final game of the season; two sides desperate to win to restore battered reputations in what has been a tough season for them both.

Emotions ran high at the end of this final game of the season; two sides desperate to win to restore battered reputations in what has been a tough season for them both. And yet again - for the fifth time - Eastbourne were beaten by the narrowest of margins and with the clock almost on full time. After the poor performance at Folkestone the previous week, this was a fine showing by the Blue & Golds however who played some scintillating rugby and so nearly got the win that they sought.

It was the visitors who hit their stride from the kick off; failure to control and secure the ball signalled a huge effort by the Park House forwards and led to the opening score. Things looked ominous but Eastbourne were soon finding better rhythm and applying pressure on the visitors. A superb follow up by Ethan Quin on the visiting full back forced an error from him and from an attacking scrum, Groenen picked up, fed Pysden whose sweetest of passes put Quin through under the posts. Ring`s conversion put Eastbourne into the lead; however another big effort from the visitors swept towards the home try line and despite some outstanding defence, they scored their second. The conversion put them ahead but with half time approaching an attacking line out was won by Redman and a rolling maul drove towards the try line for Nathan Ring to touch down. His conversion was just wide so with half time at 12-12, the final 40 minutes of this season`s rugby was destined to be as close as it could be.

Two scoring opportunities went begging for the visitors in the early exchanges. Stout defence held their centre up when he should have grounded the ball and a silly penalty in kickable range should have been put between the uprights. Luck seemed to be favouring the Blue & Golds and then from nowhere came the try of the day. Steve Clark broke 2 tackles and his back line surged downhill with him. The ball was passed at speed and Max Cheater got the final touch for what must one of the finest tries seen at Hampden Park.

With three minutes left to play, it seemed that 17-12 was to be the final score but Park House were not finished. One last push and a try under the posts levelled the scores. This time the kicker made no mistake and Eastbourne were left with no time to respond. Defeat is always bitter but there was plenty to be proud of; Leigh Williams, one of the new youngsters in the side was chosen as man of the match