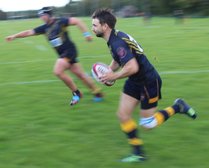 Last week's narrow defeat to Uckfield was banished in grand style against a weakened, understrength Ditchling at Hampden Park.

Eastbourne R.F.C. Match Report Saturday 16th September 2017
Eastbourne 71 - Ditchling 5.
Last week's narrow defeat to Uckfield was banished in grand style against a weakened,understrength Ditchling at Hampden Park. Early exchanges were characterised by scrappy play and a brief shower prior to the encounter produced slippery ball. A few chances went begging but the general pattern suggested a more coherent direction for the Blue and Golds. After a quarter of an hour Eastbourne found themselves in opposition territory and an inspired cross-kick from Lee Walker saw the ever-mercurial Charlie Sweet judge the bounce perfectly to gather the ball and speed over for a first score. Nathan Ring converted to give the home side a deserved lead. This was followed by a fine run by Carl Slaughter to add another five points. Some ten minutes later Mo Rokan burst out from behind the pack for an excellent solo effort. Eastbourne were by now getting into their glorious stride and a loose ball saw the skipper Tom Redman pounce and sprint away for a try under the posts. Nathan Ring added the extras. A few minutes later Redman scored his second outpacing the hapless opposition to the line. Ring duly stepped up to add two points.

By half-time it was 31-0 to Eastbourne and with the slope, drier conditions and the crowd baying for more, the home team ran at their luckless opponents and produced some fine passing movements and a brimming hatful of tries. As a minor tornado made its presence felt in Sussex Eastbourne conjured up their own hurricane of touchdowns to the delight of their supporters. Charlie Sweet added two more tries, Nathan Ring a swallow dive of his own and more conversions, including a miraculous long-distance effort that ricochet'd off an upright. Tom Shuttleworth got into the act before a bit of sloppy clearing on the Eastbourne line led to a consolation score by the visitors. In response Shuttleworth scored his second try of the day. Towards the end of the match Charlie Sweet dashed in for his fourth try, duly converted by Nathan Ring. The final score was 71-5. All praise to Ditchling for sticking at it and fighting with spirit. Their pack held up well and what little ball they could gather was used well against overwhelming odds. For the home side, Tom Redman led by example, the forwards battled aggressively to provide the platform for the tries. As the game progressed early penalties were soon forgotten and there were no yellow cards to hamper the team's performance. Man of the Match Josh Imich.