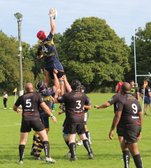 A loyal band of Eastbourne Nomads, whose match had been cancelled at the last minute by Crowborough, travelled to Burgess Hill to support the first team in their third match of the season. The weather was mild and pleasant, the conditions underfoot promised a perfect platform for running rugby and plenty of scores. But the visitors were facing a determined opponent smarting from two narrow defeats to Hellingly and East Grinstead.

The Blue and Golds started in confident fashion and threatened the Burgess Hill defences in the opening exchanges. The home side then began to fight back recovering from an uneasy start. Nevertheless, it was Eastbourne who scored first. After a brilliant, forceful run, change of direction and effective hand-off Karl Platel set up Charlie Sweet for an opening score under the posts. Nathan Ring converted and the visitors' spirits rose. At this point the home side, fearing for the worst, another defeat looming, stepped up a gear and replied with devastating effect, scoring two tries in the space of five minutes. The unnerving effect of this response led to some very careless and lacklustre play by Eastbourne. Their scrum was being given a very hard time of it and possession was sloppy, handling poor and their general play became very disjointed. After half an hour Burgess Hill ran in a third try to lead 17-7. Just before half-time the home side added a penalty to give them the upper hand. Burgess Hill 20 - Eastbourne 7. To add to Eastbourne's woes winger Karl Platel left the field injured.

After a poor start to the second half the Park Avenue team were penalised once again and Burgess Hill added to their tally with another straight-forward penalty. For a moment, however, Eastbourne raised their game and a great break by scrum-half Sid Hiremutt split the defence and good support by Nathan Ring led to a fine try under the posts. Ring duly converted his own excellent effort. But this was the last Eastbourne score as the home side took full control of the match, dominating in the scrum, attacking and counter-attacking with great effect and superb team-work. Mistake after mistake crept into the visitors' play leading to an avalanche of tries by the hosts. In the end Burgess Hill romped home with nine tries, resulting in a final score of 54-14. After a bright start Eastbourne faded badly. They now need to pick themselves up and look carefully at their performance. There is a lot of work to be done. Next week the team faces Horsham side Barns Green.