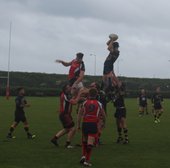 Eastbourne go down to Seaford

Facing old foes Seaford for the first time in three seasons Eastbourne expected a vigorous encounter and, licking their wounds from the Burgess Hill defeat, the visitors also prepared to start in style with an aggressive assault on the home line. This they did with great effect and after only a few minutes were successful in blustery conditions with a first try scored by Joe Bettles. Waking up from the shock of this early setback Seaford fought back and with their strong pack and solid defence neutralised any further assaults the Blue and Golds made. The wind made line-outs, long passes and kicking a very awkward spectacle at times. Seaford used the wind behind them to progress towards the Eastbourne line. Good tackling kept them out. But frequent penalties awarded against Eastbourne gave the men in red more territory and more opportunities. However, it was only towards the end of the first half that Seaford succeeded in penetrating the Blue and Golds' line for a try. And, miraculously, the home side converted the touch-down to give them a slender lead. A few minutes later a further infringement of the laws gave them another penalty which they duly converted. At half-time Seaford led 10-5.

In the second half with the wind behind them Eastbourne tried their utmost to get into a rhythm of passing movements which broke down usually with the last pass. Good tackling kept Seaford well away from their try-line, but wayward handling spoiled their best attacks and frustration started to creep into the game, a match made more turbulent by the winds sweeping off the Channel. Try as they might Eastbourne could not get another score and despite two valiant long-distant attempts at goal by Nathan Ring (later yellow-carded) the score remained at 10-5 at the last whistle. Eastbourne showed lots of determination, a faultless spirit and great endeavour. They now sit 6th in the league above Barn's Green and Ditchling. Next week they face the former in the re-scheduled match at Hampden Park and then at home welcome League leaders Hellingly. Hard work and stern tests lie ahead.