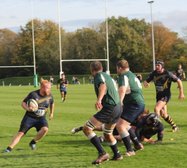 After an heroic battle against turbulent winds and a feisty opposition at Park Avenue the week before, the Blue and Golds were expecting an equally daunting task away to East Grinstead

After an heroic battle against turbulent winds and a feisty opposition at Park Avenue the week before, the Blue and Golds were expecting an equally daunting task away to East Grinstead, one time high-fliers from north Sussex. The home side, it was reported by local supporters, had, despite a creditable second place in Harveys Sussex One, not been firing on all cylinders and needed to put on a good display to rival leaders Hellingly. The home fans were not to be disappointed. Stunning Eastbourne with excellent team work, quick passing and determined running East Grinstead shattered the visitors with some early tries. Poor tackling aided the home side's ruthless and overwhelming opening barrage of scores. Within twenty minutes the men in green had accumulated four tries to lead 24-0. Their kicker was on song and slotted conversion from all angles. Eastbourne appeared to be helpless in the face of such confidence and speed. Occasional flashes of good possession and hard work left the visitors empty-handed despite their best efforts. On the half hour East Grinstead piled on the pressure. A hamstring injury to wing Carl Slaughter added to Eastbourne's misery and by half-time the score stood at 38-0, despite good passing movements and improved handling by the visitors. Tyler Bowrie was also making an excellent contribution with some vigorous assaults on the home defences. Conditions were perfect for running rugby and despite a brief scoreless interlude of about five minutes after the resumption of play, the resolution and energy of the home side brought more rewards and more scores. Leigh Williams left the field with a nasty head-injury. At this point the Eastbourne spirit seemed to revive and some good work drove them up towards the opposition line. Only penalties and poor handling prevented them from capitalising on the territory gained and the visitors were unlucky to get what would have been a just reward for their endeavours. By the end it was all East Grinstead again, much to the delight of a huge home crowd and the final score stood at 62-0. All in all, it was chastening experience for Eastbourne's young side coming up against a home team that was truly and so effectively in control. Nevertheless, the Eastbourne penalty count is down, the passing has been rapidly improved and the spirit is intact. There were moments of good play on the Eastbourne side. The team must now continue to work on its defence and remain focused in attack. There is, as we have noted before, a lot of graft to be done but also good prospects for the future. Next week the fixture against Ditchling at 2.30 will be at home and not away.