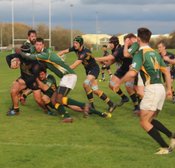 After a chastening defeat away to high flying East Grinstead last week Aidy Norwood and his team of coaches worked hard with the players in training during the week, determined to improve for Saturdays clash with Ditchling. The weather at Park Avenue on Saturday was perfect for running rugby and there was a lot of positivity coming from the blue and golds during the warm up despite inspirational lead coach Steve Clarke being absent due to illness. The side lines were however full of ex players who had arranged to come and support Eastbourne which was great to see.

The opening 10 minutes of the game were fairly non eventful with play toing and froing between each sides ten metre line. First team debutant Liam Pyle showed some class at fly half early on and gave the gathering crowd some early signs of what was to come. Eastbourne certainly looked the more likely to open the scoring, and did so following a nice backs move seeing veteran Paul Keen break the line from full back and switch the ball inside to another first team debutant Furo ‘Fred’ Adoki who raced through to score unimpeded under the posts. Nathan Ring converted.

Ditchling responded well to going 7-0 down and put some good phases of play together and on 21 minutes, helped by a couple of missed tackles in midfield saw their big number 6 get over the line. The conversion was struck well but hit the post. Now it was Eastbournes turn to respond and dominated possession and territory. Eastbourne were clearly the fitter side and the pack were starting to see some success against a much bigger Ditchling front 5. On 36 minutes Ed Longton got the ball away from a scrum quickly and opened up the field for the backs to get the ball through the hands to Mo Rokan who scored in the corner. Ring was accurate with the conversion. Confidence was clearly growing in the young Eastbourne side and the volume from the crowd was rising. From the restart Eastbourne held on to the ball working their way into the Ditchling 22 where, from a scrum, Tom Shuttleworth picked from 8 and powered over to score under the posts, Ring converted for the extra points. At half time Eastbourne lead 21-5.

The second half started as the first half ended with Eastbourne dominating possession and scoring a further 2 tries in quick succession both converted. This was soon followed up with another try under the posts by Tom Redman after a bullocking run from new wing Agoki, the extra two points were easily added. Eastbourne were full of confidence, typified by man of the match Joe Bettles who didn’t miss a tackle, made some lovely offloads and overpowered his much larger opposite number at scrum time. On 65 minutes Sid Hiremutt took a huge hit from the very strong tackling Ditchling number five and was unable to continue. After the injury break Ditchling seemed to find some form, helped by some poor discipline from the blue and golds, and whilst never endangering Eastbourne’s try line had the better of the ball. In the last five minutes of the game however, much to the delight of the home crowd Tyler Bowry dislodged the ball from the Plumpton left winger following a well timed tackle allowing Nathan Ring to pick up the loose ball and canter in, Ring converted yet again. The clock hadn’t quite hit 80 minutes giving Eastbourne a chance for one more attack, Eastbourne kept the ball alive allowing Ring to finish off a nice passage of play to score his second try in two minutes. Final score Eastbourne 54 – 5 Ditchling. Norwood described the win as a confidence booster and was delighted with the debut performances from Liam Pyle at 10, Josh Commons in the second row, the long striding Agoki on the wing and Chris Moye in the pack. Norwood added ‘The coaching team are looking forward to working with the lads this week at training in preparation for next Saturdays test at home to Burgess Hill, onwards and upwards’