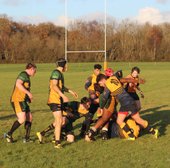 A good start but poor conditions led to costly mistakes.

It's a long walk from the changing room to a muddy, slippery pitch on a cold day with the sun glaring in your face. Despite a good result against Hove and a valiant, skilful performance against league number three Burgess Hill, Eastbourne came up against a full-strength Barns Green determined to get their revenge for an earlier drubbing at Hampden Park. Nevertheless, Eastbourne started well and looked to get on the score-board early on with some resolute attacking. But it was Barns Green who took advantage of loose play in the opening minutes to charge uphill, win a line-out and drive over for a try. The conversion was well-struck and flew over the cross-bar. The visitors, however, were not at this point in the proceedings phased by this and drove back downhill to score their own try. No 8 Giles going over for an unconverted touch-down. Poor conditions led to mistakes in handling and Barns Green were quick to reply with another try. It was 12-5 to the home side. A quarter of an hour passed and they added to the score. Eastbourne had little to show for their efforts. Just past the half-hour an attacking move by the Blue and Golds resulted in sloppy handling and a poor pass led to an interception, gratefully accepted by an opposition back who raced all the way to the posts. The try was converted and at half-time the score was 24-5 and looked as if an avalanche was about to engulf the boys from the Sunshine Coast. Despite repeated attacks by Barns Green who were playing some excellent rugby, dominating the scrum and repeatedly testing Eastbourne's defences, there was no further score for twenty minutes when the resolute tackling by the visitors finally gave way. Shortly after this score Ring was yellow-carded, putting further strain on the Blue and Golds. Despite their best efforts the home side could still not penetrate Eastbourne's defences. Towards the end of the match a determined effort by the visiting side enabled them to get into Barns Green's territory for the first time in the second half but to no avail. And it was a jubilant home side that put the finishing touches to the score-board. Barns Green, who played skilfully, enthusiastically and confidently throughout deserved their victory. Final score: 34-5. Eastbourne must now pick themselves up and remedy their poor handling and ineffectual kicking. Despite some determined tackling they came up short on this occasion. On 9th December we welcome Seaford at Park Avenue and on 16th we make the short trip to Hellingly for the last match of 2017. We must be prepared.