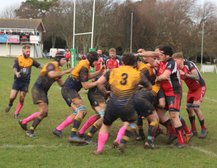 Quite how Eastbourne managed to lose this key game will remain a mystery which, the club hopes, can be solved by the coaching staff. For 20 minutes the Blue & Golds were fluent and expansive and raced into a seemingly unassailable lead. For the remaining 60 minutes, they allowed the tables to be turned by the visitors who went home with what had seemed an unlikely victory.

It was a sombre day at Hampden Park following the midweek death of much loved member Jane Brooks (inset). A one minute round of applause from both sides will have been greatly appreciated by her family. And it seemed to drive Eastbourne into the kind of running rugby which has been rarely seen this season. Passing was crisp and accurate; running lines and positional play were exemplary, so much so that within 5 minutes of the start, the scoreboard moved on to 7-0 following a scintillating break down the left flank and a try for Sid Hiremutt which was superbly converted by Nathan Ring. And it was Ring who made the next break before getting his pass to Everett on the other wing who found Tom Redman in support to make it 14-0.

The home pack looked dominant and from an attacking lineout, James Smith was driven over; this time the conversion was missed but it seemed to matter little in that from the restart, a further try came for full back Carl Slaughter, The successful conversion took the score to 26-0 and an exuberant crowd of spectators expected more to follow.

What happened next almost beggars belief. To their credit, Seaford began to play to their strengths. Big forwards and a class full back began to fight back, helped by the gift of numerous unnecessary penalties against Eastbourne. But more importantly it was the failure to make crucial tackles which began to give the visitors hope. By 25 minutes, Seaford had scored twice within a few seconds. Just before half time, poor defence at a lineout enabled the Seaford forwards to edge over for a third. At the interval a 26 point lead had been cut to 26-17.

During the break it was deemed necessary to replace No.9 Rokon and hooker Bowry. Some positional rearrangement followed and substitutes Patterson and Gibson entered the fray. A further Seaford score brought the sides still closer at 26-22. Although a couple of promising moves ended up just short, the balance seemed to be tipping towards the visitors. With ten minutes left to play Seaford managed their fifth try of the afternoon and moved ahead for the first time. And although Eastbourne had one further forward effort, it was snuffed out and the win went back to The Salts.

A sad day at the fortress in so many ways.