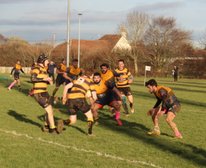 After the disappointment and emotion of Eastbourne’s 2nd half defeat at home to Seaford RFC the blue and golds travelled to undefeated league leaders Hellingly.

After the disappointment and emotion of Eastbourne’s 2nd half defeat at home to Seaford RFC the blue and golds travelled to undefeated league leaders Hellingly. In years past the playing surface would not have been able to hold up to the heavy rainfall during the week however recent investment in the home sides pitch provided a good surface for running rugby and meant that both sides had every opportunity to show their skill set.

The first five minutes of the match was played between the ten metre lines with neither side looking particularly dangerous. Eastbourne were the first side to falter by giving away a silly penalty just outside their 22. Hellingly decided to opt for a scrum and showed their dominance in this area with a big push allowing the Hellingly 8 to pick and go. His forwards followed him and they mauled their way down the left flank eventually releasing their winger to score in the corner, the conversion to follow was missed. The home crowd, buoyed by this simple but effective move started to raise their voices, was this a sign of what was to come or could Aidy Norwood’s men come back fighting? Given Eastbourne’s recent run of results you may have expected the side to drop their heads however the level of intensity over the next five minutes saw Eastbourne dominate possession however Hellingly’s defensive line looked solid. Eastbourne needed a spark to break down the well-disciplined defence and that came from Sid Hiremutt who took a quick tap penalty on the Hellingly 22 before handing the ball down through the backs allowing skipper Joe Bettles who somehow found himself on the wing to touchdown for five points. Nathan Ring followed up with the extra two points with a finely kicked conversion. Eastbourne took the lead and it was now the away crowd who started to increase the volume on the side-lines.

The joy however didn’t last for long as Hellingly replied with a try of their own within minutes which was a carbon copy of their first, again the conversion was missed. This was followed shortly after with yet another pick and go from the base of the scrum allowing the pack to trundle over the try line, under the posts this time making the conversion far easier for the Hellingly fly half. The conversion was scored and Hellingly were starting to look the more dangerous side. Eastbourne were struggling to retain the ball and were missing far too many tackles, except for the away teams man of the match, scrum half, Ed Longton, who despite being the smallest man on the pitch certainly let the opposition know he was there. On the half hour mark and 36 minute mark Hellingly scored another two tries both picks from the base of the scrum, followed by more pick and goes from the pack followed by scores in the left corner. Clearly Hellingly had been practicing this in training and Eastbourne was not offering much up in the way of defence to stop it. At half time Hellingly lead by 27-7.

Unfortunately for Eastbourne despite some improvements in tackling the second half continued in much the same vain as the last 20 minutes of the first, Hellingly dominating possession and looking far more the likely team to score. Hellingly once again showed their power up front with a strong drive down the middle of the pitch and bowling over for their sixth try of the game and putting the match out of Eastbourne’s reach. The outstanding try of the game came shortly after with Hellingly's rangey right winger, who hardly saw the ball in the first half, break a tackle and run 6o metres down the touchline in front of the home supporters before stepping off his right to offload inside to a supporting runner who jogged in under the posts which was followed up with the conversion taking the score to 41 – 7. Two more tries followed with one of them successfully converted resulted in a final score of 53-7.

Eastbourne now has a two week break over the festive period before facing 2nd in the league East Grinstead at Park Avenue.