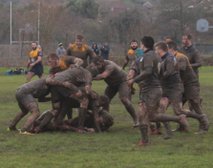 After a break of 21 days over Christmas, Eastbourne RFC were ready to take to the pitch once again and were desperate to show they were far better than the last performance against Hellingly suggested. Ahead of the game, 1st team Manager Aidy Norwood said ‘the boy’s attitude at training this week was exceptional and they were raring to go’. Weather conditions were perfect with very little wind and bright sunshine however Park Avenue had suffered from the recent constant rainfall and going was ‘heavy’ underfoot to say the least.

Eastbourne’s first match of 2018 was at home to high flying East Grinstead, recent form would suggest a tough day lay ahead of the blue and golds. Bourne had the best of the opening exchanges showing some good handling from the pack and clever kicks from Nathan Ring who had stepped competently in to the fly half position. Norwood’s men however, didn’t look like breaking through the Grinstead defensive line. On 10 minutes the Grinstead fly half decided to use his very useful right boot to pin Eastbourne in their 22. Eastbourne soaked up the pressure well, scrum half Ed Longton once again proving his bravery and strength with some excellent tackling. Eventually the pressure told with Eastbourne giving away a penalty in front of the posts which was converted and gave Grinstead a 0-3 lead. Grinstead were clearly lifted by this score and continued to pile on the pressure in the Eastbourne 22. Lesser sides would have capitulated under such pressure however Eastbourne also raised their game with some quite brilliant defending. Despite being 0-3 down Eastbourne seemed to go into half time with a spring in their step and looking the more positive of the two sides.

Eastbourne definitely edged the possession stats of the opening 20 minutes of the second half and despite the pitch turning into a quagmire and the ball more slippery than a bar of soap played some excellent rugby. Unfortunately the home side could not break through the East Grinstead defence, and on 60 minutes Grinstead were awarded a penalty which was successfully kicked for another three points. This was shortly followed up with a well taken if slightly fortunate try which was converted. Eastbourne’s response was almost immediate a good move down the right wing saw Nathan Ring burst through a couple of tackles and stride over the line for a great try in the corner. Ring was just short with his conversion attempt. Momentum was now clearly with Eastbourne and the rest of the match was spent almost entirely in the oppositions half. East Grinstead continued to defend resolutely and proved why so few teams have scored points against them this season. At the final whistle the game ended in a 5-13 defeat for Eastbourne, however the performance against a side second in the league was excellent and there are many positives Norwood and his lead coach Steve Clark can take into the second half of the season.