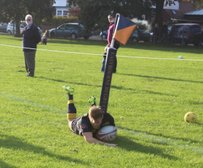 There was a friendly welcome for the West Sussex side making their first visit to Park Avenue on Saturday; a dramatic change in fortunes for the home side gave a much needed boost following the disappointment at Seaford the previous week. The Blue & Golds were strengthened in forwards and backs with standout performances by Giles and Di Leito in the second row; by Longton at scrum half and by Ring and Walker playing together in the centre with increasing confidence.

The weather made for an open game and the pitch looked splendid. And Barns Green came out determined to take the game to Eastbourne. They had the best of the first 15 minutes but no score to show for their efforts. The first time Eastbourne threatened the visitors` line, they scored through Di Leito, a try converted by Ring. And within a minute of the restart, a further try by winger Carl Slaughter took the Blue & Golds further ahead. Again a fine conversion by Ring making it 14-0.

Barns Green refused to capitulate and fully deserved their own unconverted try on the half hour. However the second half was always going to be easier for the home side who now had a setting sun and the slope in their favour. Within 5 minutes, Nathan Ring showed his class with a fine individual effort which he narrowly failed to convert. And when right wing Karl Platel scored his first try for Eastbourne to take the score to 26-5, the win looked inevitable. This was the point when the home players began to play confident rugby. Longton`s linkage between forwards and backs proved highly effective and although he was substituted for the final 15 minutes, the momentum was there until the final few minutes. Full back Everett scored in the corner and Ring got his second of the afternoon shortly after. The pick of the Eastbourne tries however was scored by Slaughter who judged a brilliant box kick by substitute Rokan to take a clean catch and run 40 metres for a superb touchdown. It was fitting perhaps that such a positive side as Barns Green should score the final try of the afternoon. Taking advantage of free ball, their forwards burrowed over on the final whistle.