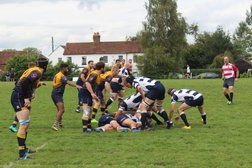 A great first outing of the season

After a resounding triumph in The Sussex Shield in April following a poor start to the season and a gradual and heartening improvement all round for Eastbourne and a relatively disappointing season for the Cup Final runners-up, this encounter at Saint Hill would be an interesting pointer to the new season for both clubs. In the past East Grinstead had benefited enormously from the arrival of Eastbourne players such as Dominic Groenen and Matt Pysden. Both had served the north Sussex side well in their rise to the giddy heights of a successful Twickenham Cup Final. Conversely, Eastbourne had been enriched by the playing and coaching skills of one time East Grinstead and Sussex captain Rick Walshaw.

The pitch was firm and the skies clear. After a close and even start East Grinstead took the first laurels with some vigorous running, aided by poor defence on the Eastbourne side. Ten minutes into the game and the home side were two tries up. But a quick response from Eastbourne saw winger Sid Hiremutt wriggle over for a try converted magnificently by Nathan Ring. An injury to East Grinstead's winger in the first few minutes, was followed sadly by serious injury to Ed Longton. Sid Hiremutt took over the No.9's duties. At one stage the home side were leading 17-7. Unlike previous encounters and previous matches, however, the visitors heads did not drop. Despite one or two arm-wrestles off the ball the Blue and Golds lifted themselves with determination and great team work. A titanic forward effort pushed the scrum to within ten metres of the line. Possession was held and the visitors drove aggressively towards East Grinstead's try-line. The momentum was unstoppable and the irrepressible Nathan Ring crashed in for the try. Then, magically, the hooker stepped up for a superb conversion from wide out. Thus the score stood at 17-14 at half-time.

The second half saw the home side trying in vain to breach the Eastbourne line. For long periods Eastbourne fought off waves of marauding opponents and kept them at bay. The scrum was solid, Eastbourne disrupted the opposition line-outs and were doing great poaching work at the breakdown. Despite fewer incursions into enemy territory Eastbourne were able to threaten East Grinstead's line on a number of occasions. One such foray led in the last few minutes to a penalty some thirty metres from the goal-posts. Ring stepped up confidently and sent the ball sailing over the cross-bar. With a few minutes to go, in what seemed like an endless contest with long stoppages for injury, Eastbourne held on and kept their adversaries out.

East Grinstead's supporters were bitterly disappointed but it must be said on behalf of Eastbourne that they can be justly proud of this performance. All the hard work during the latter stages of last season, the astonishing victory in April and sterling preparation before the season, including a fine victory over Hasting on 1st September, have led to the formation of a fine squad of players who work well for each other and are fearless in defence and imaginative in attack. Even without the mercurial ex-skipper Tom Redman, Eastbourne, have prepared well and shown what great potential they all have.

Man of the Match: Conrad Major