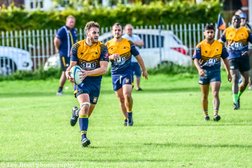 A dramatic win for Eastbourne

If Eastbourne entertaining Seaford usually makes for a tense game, there can be nothing like the final quarter of this game at Park Avenue on Saturday. With plenty of noise from both sets of supporters, the tension mounted as the game reached a dramatic conclusion. When Nathan Ring converted his own try with the last kick of the game, the roof nearly came off the clubhouse. If every home game is played with the passion shown here, then it could be a thoroughly enjoyable season for the Blue & Golds.

There are plenty of things that the coaching team of Norwood, Clark and Barron need to address. In the first half Seaford scored 12 points all from penalties...and it could have been more if every attempt had been successful. Time and again the play was disrupted by the referee`s whistle, often for avoidable errors. It was only on the half hour that the home side showed what they were capable of by driving upfield, keeping control and allowing big lock Ryan Giles to claim the points. A difficult conversion missed narrowly and at half time the score stood at 5-12 to the visitors.

To their credit both sides seemed to sense that in the second half the game was there for the taking. Conrad Major, playing a fine game at No.8 was bundled over in the corner following a catch and drive at a line out on the 5m line. Almost immediately however, Seaford responded. Using their big forwards to good effect, they capitalised on some shallow defence and found what seemed to be a tiny space along the touchline to move further ahead at 10-17.

Enter the fray new flanker Hayward, who seemed to tackle like a man possessed. His non stop work in the loose not only gave him man-of-the-match later but also spurred the Blue & Golds on for the final 20 minutes. A penalty 5 metres out against Seaford gave Major his second score of the afternoon which Nathan Ring easily converted. At 17-17, there were resonances of last week`s result at East Grinstead. But the drama was only just beginning.

One player from each side received a yellow card from the referee and with 5 minutes left on the clock, an heroic tackle by replacement winger Wandera, left him lying injured whilst play continued around him. Seaford managed a final push from the pack and their unconverted try appeared to give them the game at 17-22. But seconds remained on the watch and quick thinking by Hayward and Ring snatched a vital try; if Ring converted, the victory was certain. The crowd fell silent; if he felt any nerves with his kick, he hid them well and the ball sailed over. A pulsating end to a game that had been a credit to both sides

Man of the match Hayward