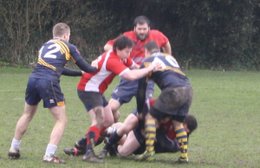 Tom Bailey joining the 1st XV in the front pack and return of Lewis Edwins as Hooker.

Conditions were wet and soft under foot and would test both teams. Chichester very early on wanting to stamp their authority on the game running the ball from depth to gain yard advantage and force Eastbourne to defend being awarded an early penalty in which Chichester deciding to go for points placing their kick through the posts to take a lead of three points.

Chichester continued to apply pressure, finding channels through the center again forcing Eastbourne’s back line, Nathan Ring and Second Row Matt Mottram making critical tackles. Eastbourne tried to break out of their own 22 area with determined runs by Andy Curtis and Stefan Cousins but soon stopped allowing the forward packs to battle it out to win crucial ball. Chichester’s physical presence in Eastbourne's 22 proved too much and from a lineout move scored their first try penetrating through the defensive line and having converted started to increase their lead. 10-0 to Chichester.

Eastbourne started to find their strength within the forward pack fighting for every loose ball driving forward during rucks and providing confidence and keeping the ball tight not allowing Chichester to gain possession evidenced when via a knock on found Eastbourne's Pack 5 meters away from the Chichester line and drove forward with Prop Matthew Webb standing back to receive the ball then driving over the line to score Eastbourne's 1st try. Nathan Ring converting another 2 points just before half time bringing Easbourne back in the game.

Eastbourne from the whistle forced Chichester back finding Nathan Ring who broke their defensive line and powered towards Chichester's try line being tackled just before the line but with Flanker Andy Curtis hot in pursuit seizing the opportunity to grab the ball and carry over for an awarded try. Nathan Ring making his kicks two out of two for a 4-point lead. 10-14.

The Forward pack continued to dominate the scrum providing Eastbourne ball in which they continued to push forward attempting to find gaps forcing a penalty within Kicking distance, Nathan Ring converting for another three points, 10-17.

With Dan Keen, Max Cheater and Jamie Keen coming on to the field again bolstered both the forwards and backs and although play resumed mostly within Chichester's half kept their patience and forced another Penalty to which Nathan Ring capitalized adding another three points – 10-20. Eastbourne’s number 8 Luke Turner peeling off from the back of the Scrum broke free and was brought down by an excellent defensive tackle off-loaded to supporting Obey who safely crossed the line to add another 5 points. Nathan Ring again placing through the up rights to again finish the final score as 10-27 to Eastbourne.

MoM – Voted by Players and spectators – Andy Curtis for his relentless battle to win ball.