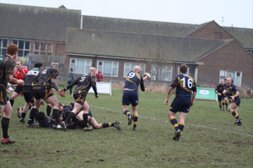 Eastbourne 1st XV battle it out against League Leaders Burgess Hill. A cold afternoon at Park Avenue with many supporters from both sides as they took to the stage for the return leg of the Sussex 1 League leaders Eastbourne and Burgess Hill match.

The game started with Burgess Hill demonstrating their strength in their back line forcing Eastbourne to defend and spread wide as Burgess Hill passed down the line making yardage down the field to then put early points on the board from a well worked backs try but failed to add additional two points for the conversion.

Despite Eastbourne trying to penetrate Burgess Hill’s defensive line with a good interception run by number 10 Adam Tennant with Rob Fenner outside for support was not as perhaps as quick or slick as evidenced in previous games allowing Burgess Hill to prevent a Try for Eastbourne and securing the ball placing down the field into touch for a lineout clearing the danger.

Eastbourne did have their chances to close the points gap, a penalty awarded and the choice to go for goal but it was not to be Eastbourne's day as pulled wide by the Number 10 Adam Tennant off the right post.

Another Try scored by Burgess Hill capitalising on loose ball again from the break down swinging the ball out wide for their Centre to make yardage and release for Burgess Hill to score another try.

The Second Half saw Eastbourne put points on the Board as Matthew Webb crossed the line from forwards continuing to pressure Burgess Hill’s line only 5 meters out and with Prop Matthew Webb standing out ready to receive the ball forcing his way over. It wasn’t going to be Eastbourne’s day as number 10 just pulled the conversion wide of the posts.

Burgess Hill defended well although Eastbourne maintained their composure and despite both passion and territory in the second half, Eastbourne could not add to their try to get closer to Burgess Hill’s score line in the 1st half. A strong performance by Burgess Hill who are the league Leaders of the Sussex Spitfire 1 league table.