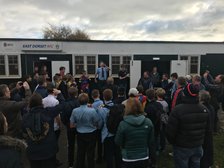 East Dorset - What happened this weekend?

An insight into the club during the first weekend of December

With the first team without a game this weekend, it was the perfect opportunity to rest up and recover ahead of what will be a tough league clash with the league leaders.

Sherborne have gone unbeaten this season, winning 9 from 9 in the league. This will be a difficult game for East Dorset, who lost when both teams last faced each other, but the team will hope to follow on from their good form last week in a league win against New Milton.

While the first team didn't play, East Dorset youth teams trained hard on Sunday morning, with two games taking place at home against Lychett Minster, whilst the rest of the youth set up were away at Fordingbridge.

Those that trained away had an enjoyable day and felt very welcomed by Fordingbridge RFC. The under 9's, 10's and 11's enjoyed focused rucking drills.

The games at home were met with good crowds of support from parents and club members, which really helps to spur the teams on.

Despite losing, East Dorset under 15's scored 3 tries, which was a distinct improvement on previous games this season. The coaches were happy with the progress made in training and the results showed in the game.

A man of the match ceremony was held for the first time. The challenge to finish a can of Fanta and a mars bar the quickest. Thankfully the East Dorset Man of the Match won this challenge. Hopefully a tradition that will continue.

It was an good weekend for the club and rugby was enjoyed by all.