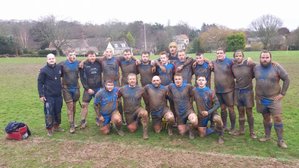 Well what a game!

The clash that saw East Dorset RFC take on Dinton RFC away on 20th January.

Thanks to the weather over the last few weeks, both teams were treated to very muddy conditions, which both sets of forwards clearly relished.

East Dorset were given the advantage of playing downhill during the first half, which they fully took advantage of. They maintained possession for large parts of the half and ensured they held a strong field position throughout, pinning Dinton into their own 22 for long periods of the game. The downhill advantage coupled with an opposition yellow card, allowed East to have the perfect start and secured vital points that would inevitably keep them ahead throughout the game. 3 penalty kicks from Kieran Wilson and a try from scrum half Sean Sims, saw East sustain a 16-0 lead going into half time.

The second half saw the tables turn, as now East Dorset would be attacking up hill. A tough challenge that was sure to make the legs burn. Dinton quickly used their advantage and scored a try 2 minutes into the half. But East Dorset continued to play attacking rugby, which eventually paid off, with quick hands from the backline, saw Wilson score a try in the corner. A tough ask for his own conversion, but this he also secured. East now lead by 23-7.

The next 15 minutes saw possession change frequently with the conditions beginning to become a challenge for the players. Despite this, no points were scored by either team.

A penalty try was awarded to East Dorset when Skipper Chris Poole, chasing his own kick, was tackled off the ball when clearly he was in for East's third try of the game.

Later East Dorset scrum half scored again, with an excellent snipe from behind the breakdown just outside the 22, following an onrushing defensive line. A hand off on the opposition 15 and Sean was through for his second try of the match. The score 37 - 7.

The home team looked well out of the running, but they quickly began to chase the game and within a minute of the restart had scored again. A third try was scored three minutes before the end, but their late push proved to be a little too late, as the score finished 37-19 in favour of the away team.

A cracking game of rugby had by both teams and thanks must go to the few East Dorset travelling supporters who were definitely the loudest in the crowd. The players really appreciate the support.

Looking ahead to this weekend, East Dorset welcome Ringwood and Ellingham RFC. In their previous league tie, Ringwood won by a narrow margin of just one point that saw the game finish, 36-35 in their favour. East Dorset will clearly want to right their wrongs from this game and prove they can beat their local rivals. Definitely a game to watch.