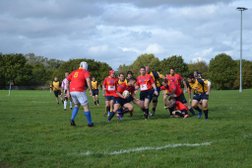 East Dorset welcome the return of Wheatsheaf Cabin Crew to Iford Lane for their first cup game of the season - KO 14:30

East Dorset look to kick off a cup run this Saturday 14th October when they take on Wheatsheaf Cabin Crew, who return a few weeks later following their defeat to East Dorset in their first league game of the season.

Since the teams last played, East Dorset have won two (Dorchester II and Dinton) and lost one (Ringwood and Ellingham II). East Dorset were unlucky to lose against Ringwood & Ellingham II as a second half resurgence nearly saw them clinch the lead, however the final score remained a close 35-32 victory for Ringwood.

Whilst East Dorset have enjoyed a few victories this season, Wheatsheaf had to wait until last week to secure their first win of the season. A tight game which saw them beat New Milton III 29-24, a win they hope will spur them on for future success this season both in the league and the cup.

You may have also noticed first team players sporting new kit during training and after matches. Thanks must go to Sam Anstey (Shed) for organising additional club clothing including polo shirts, vests and hoodies. All continue to be available, with orders going in on the 1st of every month. Speak to Shed on match days for more information. Club shirts and ties remain available to purchase behind the clubhouse bar.

As always, the bar will be open during and after the game and your continued support is very much appreciated by the coaches and players and helps to spur them on in what we hope will be another victory this season.

This fixture is one not to be missed, see you Saturday!