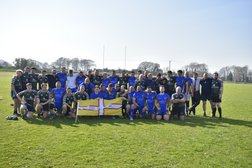 We finish with a spirited win at Wheatsheaf before the end of season celebrations kicked in!

The 2017/2018 season has come to an end with a hard fought away win at Wheatsheaf Cabin Crew.

Saturday 21st April had long been billed as the "Coach Trip", with many a player seemingly confused between whether it was the last league game of the season or an out of season party bus. Fortunately, being the consummate professionals that we are, the bottles, barrels (and fireworks) managed to stay wrapped up until the final whistle.

East made the journey up to Wheatsheaf with 24 players and a dedicated group of supporters, who made good use of the lovely weather by enjoying a picnic whilst watching an excellent game of rugby.

We had played Wheatsheaf twice already this season, on both occasions the games were very, very close. Our final game against them was looking to be no different. A frantic early start saw us try to meet Cel's request at scoring 4 within the first 20 minutes. The support and offloading was incredible for a few early tries, particular shout out to Ross "Sledgehammer" Halliday, taking 2 players off their feet with an almighty hand-off each, the second of which was 5 metres from the line to ensure he got himself on the score sheet.

Our backs really started running rings around the opposition with strong support from the pack before Wheatsheaf started steamrolling their way back into the game with some fine kicking also. They kept it close and at one point it seemed possible to swing either way. Fortunately we stuck at it and baring a nasty gash to Cel's underarm and Joe's swollen ankle, we closed the game at 17-43. Excellent kicking from young Mr. Wilson and Sean Sims displaying incredible vision to weave in and out of the Wheatsheaf defence and bag himself 4 tries. Our man of the match went to Mike "Bambi" Wallace, incredible performance in the pack throughout and strong command in the lineout - proving a key difference between the 2 sides.

This season also see's Chris Poole step down as Captain, and what a way to be seen off! A strong leader and well known and respected around local teams, he has always led by example and will continue to be a pivotal player for seasons to come (as long as the body holds up). From the whole team, thank you Pooley!

A special thanks to Wheatsheaf for not only a well fought game but incredible hospitality after the match. Great participation in our end of season celebrations and a warm send off when we left - a fine advert for rugby and we wish them all the very best next season where we'll lock horns again. An additional thanks to Abby Kennedy who provided 1st Aid treatment to Cel and got him to the hospital!

Prior to next season, Wheatsheaf will be celebrating their 25th anniversary on the 9th June - if last Saturday is anything to go by then a great day will be had by all! Everyone welcome, contact us for further details if you'd like to join in with the celebrations.

Before we bring the curtain down on what has definitely been a season of rebuilding and much restructuring, we have our end of season dinner at Soho on Saturday 28th April. Contact Joe Polson for tickets - £25 p/person.

We will be upping our social media engagement throughout the summer so be sure to keep in touch to check on events, training sessions and exciting sponsorship news coming soon!