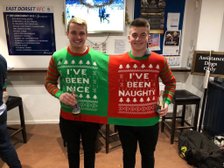 We return for our second Player Focus of the season. We catch up with Sean this week, Scrum Half extraordinaire.

After a busy few weeks away, we’re back (by popular demand) with another Player Focus. This feature see’s us sit down with one of the players to gauge their views on the season so far, and most importantly, what they think the future holds.

This week we finally manage to catch up with Mr Elusive himself, Sean Sims. As we sit down for a chat I realise something, or rather someone, is missing… Sean’s shadow, the yin to his yang, his sun and stars – Joe. As the picture highlights, they are never far from one another, so hopefully without Tweedle Dum about we might get a more honest and open conversation… here’s hoping.

Evening Sean, really appreciate you giving a bit of your time for the site. Can we start by you providing us an overview of your experience and position at East Dorset?
No problem. I’ve done 3 seasons with East Dorset. So far my experiences with East has been nothing but fun, laughter and enjoyment. This season has definitely been a lot more successful than the last. My position in the team is scrum half.

Positive review! What bought you to East Dorset in the first place?
After stopping rugby for a while I was looking for a team that had a real good sense of community that I could be a part of. My dad has always spoke highly of the club and recommended it to me.

You mentioned this season has proved more successful than the last – what was the biggest challenge last year?
I think there was a real lack of confidence after several defeats in a row it really knocked us a team. One of the most challenging things last year was putting the shirt on ready for the game and not thinking about the losses and trying to stay positive.

Must have been challenging… what convinced you then to come back for this season?
My love for rugby and my love of the club. It’s a new season, fresh start, we learn from defeat and it only makes us stronger as a club.

Great commitment, which is also evident in some of your performances. What has been the catalyst for the improvement this year?
Thank you, appreciate that. I think that we have definitely trained a lot harder, communication is a lot better and we have all gained more understanding of what is expected of us when playing.

You’ve been quite a consistent starter this season, playing nearly every game if I’m not mistaken?
Yeah, I think I’ve only missed a couple due to injury.

There have been a number of new players joining the squad this season, how do you think they’ve integrated and who stands out for you?
I think they’ve all settled in well and seem to be enjoying it. I can’t name one person, they’ve all stood out this season. They have all taken on their roles within the game and gelled well with the rest of the team, it’s definitely shown in our results.

Very diplomatic Sean… but seriously, you must have one favourite?!
I’m not a man of favouritism, there’s a few that come to mind.

Good man, you wouldn’t want to upset anyone…Sean it’s been great chatting, final words if you may – where do you see East Dorset ending up this season and what should our targets be for next year?
Exactly. Each player is unique and contributes well to the team. I see East Dorset finishing high in the table with some very good end results. Personally I think there is always room for improvement. I think there needs to be more commitment in numbers for training, but as a whole East Dorset as a club will go far as it has a very supportive community behind them.

Thanks Sean, really appreciate your time and your extremely positive outlook on the club.