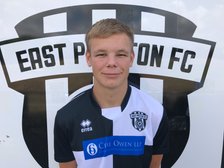 EP Out of FA Cup

In an even contest EP were made to pay for two lapses of concentration which allowed their visitors to score the goals to take them into the next round.

The best opportunities for the home side came from Luke Brodie shooting just wide after good work from Ryan Quirke. Dan Huet had two headers in the second half which, on both occasions, were just wide of the post.

With both first choice centre backs, Tom Lyne and Josh Etherington, not playing 16 year old Sam Pidgeon (pictured) made his senior debut and gave an assured display in defence.